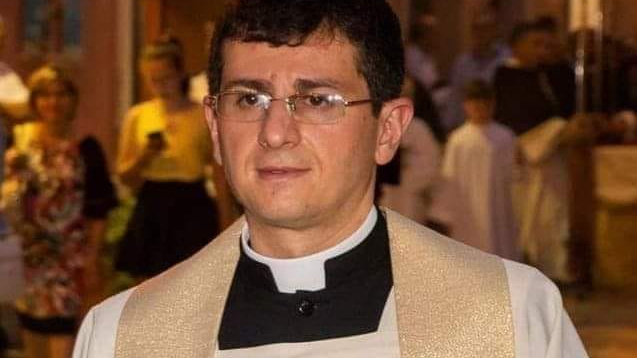 He made his declaration in a lengthy interview granted to Samuel Colombo, an Italian vocalist and political activist: the interview was published at Rivelazione.net, here in Italy. FromRome.info has requested permission to translate it, which is required in EU Law.

Don Bernasconi is a late vocation, being ordained a priest only 3.5 years ago. He serves in the Catholic Diocese of San Severino, in the region of Puglia (Apulia), on that part of the Italian Peninsula which looks like the heel of the boot. His parish at Torremaggiore is not far from San Giovanni Rotondo, famous throughout the entire world for the presence and tomb of Padre Pio.

But fair use policy does allow FromRome.Info to cite a small part of the interview, and translate that, for its news worthiness.

Who is the pope to you today? Francis or Benedict XVI?

First of all I would like to say that it is not a question of sympathy or of feeling closer to one pope than another: it is a question of truth. There cannot be two popes at the same time. I believe that, due to the fact that Pope Benedict XVI has not duly renounced the munus petrino, in his declaratio, as required by can. 332 §2 for the validity of the act of his resignation, he remains the Vicar of Christ. As some well qualified scholars have said, Benedict XVI has renounced the active exercise of the ministry but not the Petrine office; in other words, it is as if he has renounced ‘doing’ the pope but not ‘being’ the pope. This fact, from the canonical point of view, is then confirmed by the subsequent attitude taken by Benedict XVI, who did not renounce the name of Holiness, the name, the signature with the acronym that belongs only to the reigning Pontiff, P.P. (Pontifex Pontificum), remained in Vatican territory, kept the white cassock and intervened several times in the last seven years. The title of pope emeritus is something insignificant and all the more so is the concept of ‘extended’ ministry.

Do you say communion with Benedict XVI?

Let us pray for this heroic priest who is loyal to truth and to the Catholic Religion. By his decision he is risking persecution and the loss of not only his entire salary but room and board.

From the rest of his interview, it is clear that he is very well informed about the current state of the Church and the cause of the problems under which She is being crucified with Her Lord, Jesus Christ.

Don Bernasconi’s profession of truth adds to the growing numbers of clergy world wide who are declaring for Pope Benedict XVI:

To these clergy, there are thousands of laity who could be named. But the following Associations which have declared for Pope Benedict XVI are:

Veri Catholici, which has more than 3000 members world wide.