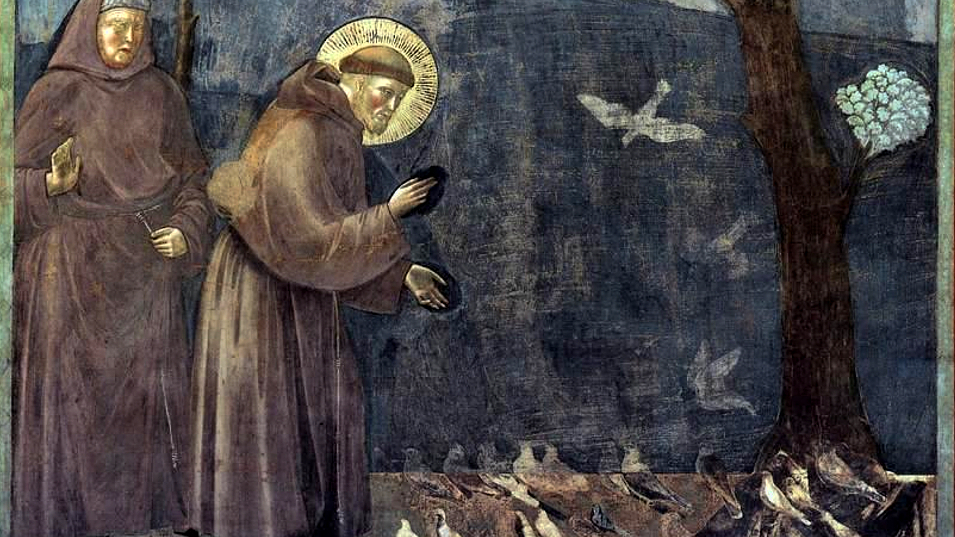 One of the things I admire most in my Seraphic Father, Saint Francis of Assisi, is his true love for Jesus Christ, Our God and Savior. He showed this most of all in his desire to repair the Church.

But we can collaborate in this work of the Holy Ghost by working to repair the Church.

A work of repair is arduous and it must be daily. It requires knocking down what is corrupt and dissolute and replacing it just as it in ages past, copying all the art and design and engineering of her past perfection.

This means that repairing the Church is a great work, and an arduous task, but that each of us has the ability to do our part where we are, in our own diocese.

And if all who profess to love Jesus Christ, and who profess the observance of the 10 Commandments and the unchanging doctrines and dogmas of the Catholic Faith, did this, the Church would be restored, because Christ gives great graces for this.

This means that we need to distinguish between the sins of men and the offices and Sacraments which Christ gave us. The former can fail, the latter can never fail.

The work of reparation does mean, in part, seeing that crooks go to jail and heretics are denounced. Indeed, if heretics are not denounced, how can Catholics obtain Catholic pastors?

The denunciation of perverts or heretics requires solid evidence. With that had the public denunciation should be made to proper authorities. And if there is no proper authority, then to the general public. The faithful of every diocese, during an impeded Apostolic See (whether by usurpation by an anti-pope or by vacancy) have the right to replace their heretical ordinary with a Catholic ordinary. This right is vindicated on this, that a heretic is no longer a member of the Church, and when a superior in jurisdiction is impeded in his authority, his authority to act in just matters and in times of great necessity can be legitimately employed in a vicarious manner by the whole local Church which remains Catholic. This is how Catholics replaced Arian Bishops with Catholic Bishops in the Arian crisis of the 4th century.

Let us not dissipate our forces by trying to have our own little private island while letting the whole Church go to ruin. That negligence is also a sin that merits damnation, because it is not only directly against the charity we should have for our fellow Catholics, it is an act of hateful crucifixion of Christ’s Mystical Body.

And the first step in this work of repair is our own humility, penitence and self reform. That is why all of us who are not married have a grave duty to consider forsaking all to become holy priests and holy religious or holy hermits. There is no greater need now in the Church, than that Christ’s Army be repopulated with such faithful servants.

This is also why it IS ABSOLUTELY NECESSARY to keep the laws of the Church, which are inscribed in Heaven, as Christ said to Peter: whatsoever you bind on earth, shall be bound in Heaven. Any Catholic, priest or layman, who tells you that you should follow common opinion and not the laws of the Church is a WOLF IN SHEEPS’ CLOTHING. Hear him no more than you would listen to the Devil.

And for that reason, the Church can only be repaired IN UNION WITH THE TRUE POPE, Pope Benedict XVI, who according to the norm OF ALL CHURCH LAWS never valid resigned the papacy and therefore remains the Vicar of Jesus Christ.

The present crisis in the Church is merely the end result of not following the laws of the Church and following the opinions of errant Cardinals and Shepherds, not the will of Jesus Christ, who said: whatsoever you bind on earth, shall be bound in Heaven, which is a direct reference to Canon Law.

Return to Pope Benedict and work to convince others to this.

To do anything else, apart from that, is to build your house on sand. So do not be surprised if it falls and is swept away in the torrent of sins.