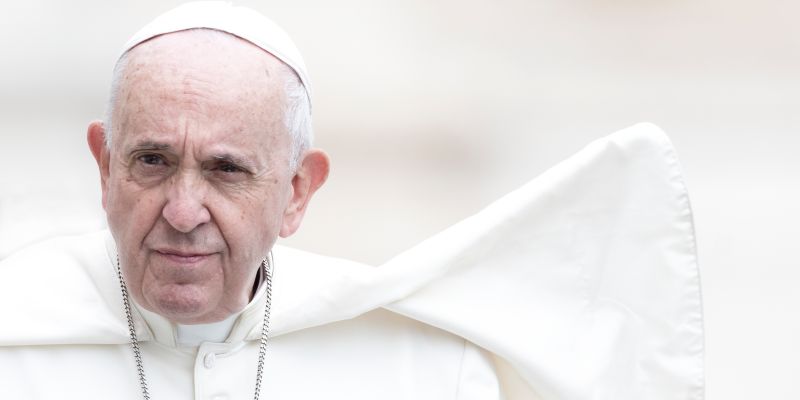 Rome: January 14, 2020: While Catholics round the world stand in total shock at the apparent eclipse of the Catholic Church on account of the outrageous heresies, blasphemies and political shenanigans of Jorge Mario Bergoglio, a word of great consolation was reported to The From Rome Blog, this Sunday:

Opposition to Bergoglio in the Roman Curia is at 100%. They want him out!

This comes from one of the top Vaticanistas of Rome who has served in the Eternal City for decades. He has deep and widespread network of informants through the Vatican and Curial Departments. He hears the same thing from all of them. No one wants the Argentine. They are counting the days!

The enemies of Christ realize that this title proves that the resignation was never complete and therefore that Pope Benedict never renounced the Papal Office at all, and is still the pope. That means Bergoglio’s entire reign of terror was uncanonical,  a fraud, of no value, not legally binding on the Church in anything.

They cannot tolerate that. So now they feel confident in removing “the evidence of the problem”.

I wonder whether there are different points of view here. Do some want Benedict to stop calling himself “pope”, signing as the “Pastor of Pastors, Pope Benedict XVI” (Benedictus XVI P.P.)*, wearing the white cassock and skull cap? Do others go so far as to want him out of the Vatican and no longer cared for by the Head of the Pontifical Household? Do still others want a “canonical” solution which pretends or keeps up the pretense of a valid resignation?

I believe dissent on this matter is visceral, right now, in the Vatican. The Head of the Vatican Police seems to have been a partisan of the group which holds that Bergoglio has no valid claim, since, when he tendered his resignation this fall, Bergoglio demanded of him that he mention, in his letter of resignation, that he recognizes “Pope Francis as the Successor of Saint Peter”, a textual statement which has nothing to do with a letter of resignation per se, but which proves that Bergoglio is on the war path to punish anyone who thinks otherwise. (Did Sodano’s sacking have anything to do with this? — I do not know, but he certainly does know of the controversy since there is nothing going on in the Vatican that he does not know through his many clients there).

And do not doubt it. The whole Roman Curia knows that Benedict is still the pope and that in their haste they were wrong in presuming that he resigned the office of St. Peter in February 2013. I make this claim on the basis of the human reactions I get when discussing this with learned partisans of the Bergoglian regime. It’s a topic with which they are very familiar and know precisely what to say and not to say to pretend otherwise. They also employ their most forceful anger against those facts and points-of-law-in-application which directly address the problem. It’s such a hot potato, that few are even willing to speak about it. And some even run away when they see you coming, if you have requested to speak with them on this topic.

Their hope is that most of the laity are dopes and will keep eating up the propaganda that their handlers in the press and social media keep putting out: Shut up! Do not think about it! It does not matter! You are seeing things! You are a heretic and a schismatic if you say otherwise!** The Revolution, in the minds of the Bergoglian party, must go forward. They have to have approbation of all that is evil and the utter destruction of the Church which claims to be founded by the true Jewish Messiah. That is the end game.

Pope Benedict XVI for his part has made it quite clear that his “yes” to accept the Papal Office is a “forever” yes. There is thus going to be a battle, and it will break out in 2020.  Catholics who love and remain in communion with Pope Benedict need to go on the war path.

We need to identify and contact the 40 to 70 Cardinals, whom the Vaticanista, Edward Pentin, said in 2017,*** were inclined to call an imperfect council to remove Bergoglio on the grounds that his claim to the papacy is vitiated by some canonical problem, whether heresy, schism or invalidity.

We need to mobilize Catholics to financially support any effort which is necessary to defend the person of the Roman Pontiff, Pope Benedict.

We need to keep up the heat on the partisans of error: those devilishly bold individuals who lie in public and are willing to say anything to keep you from realizing

Those who are telling these lies are all getting hefty salaries from someone. Those who are calling out the liars get salaries from no one. That should tell you which side is from God and which is from Mammon. As public liars and frauds, they have no right to be seen for what they are not: honest men who are intellectually respectable or reliable. For more than 6.5 years they have marshaled no arguments against the canonical invalidity. And yet they insist that they should be listened to!

We need to organize Catholics in Portugal to prepare a place or places of refuge for the Pope, if He should chose to flee Rome, since, as Our Lady hinted in BOLD LETTERS during the apparitions there, “In Portugal the dogma of the Faith will be preserved.” And all who know their Catholic theology well, know that that implies that Portugal will at the very least remain in communion with the true Pope, if not be a place of refuge for him and His valid successors, if needed.

May the Holy Saints of the Knights Templar**** in Portugal and their devotees in our own time MOBILIZE.

May we all do our duty now in the most important battle, in the Church, to come in 2000 years.

* Which clearly indicates he has in his own mind never resigned or intended to resign the Papal dignity, despite what some Cardinals are conjecturing.

** This plot to dethrone Benedict is thus evidence that their propaganda has been just that. It has served to hide the evidence from public view, it never was an honest denial.

*** See the timely report by Fred Martinez at http://catholicmonitor.blogspot.com/2019/12/is-fear-factor-keeping-francis-in-power.html

**** I mention this Order because it took refuge from an unjust suppression in Portugal and was refounded there in the 14th century. There are thus many faithful Catholics devoted to their memory, in Portugal, and I pray they become the network for helping Pope Benedict.