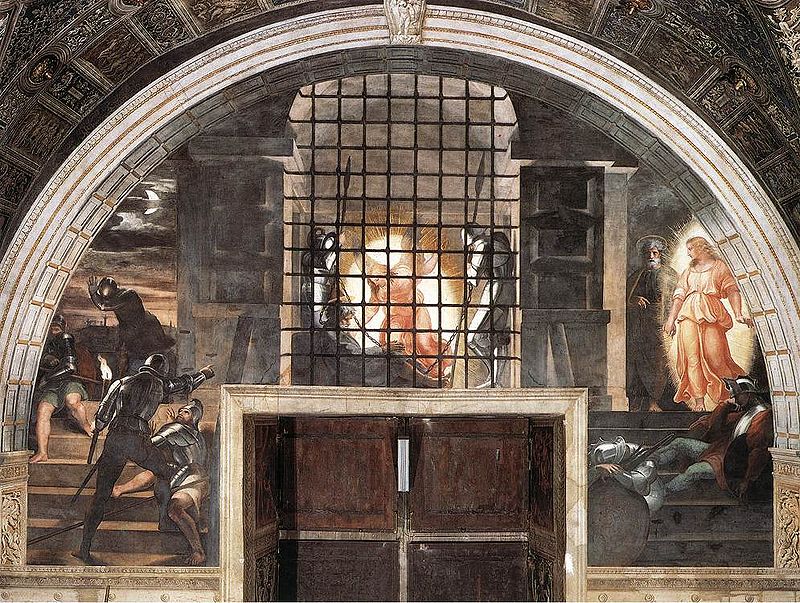 LET US PRAY FOR OUR HOLY FATHER, POPE BENEDICT XVI!

The Church has been there before. A despot ruling over the people of God who has imprisoned the Vicar of Christ.

I speak of Herod Agrippa I and Saint Peter the Apostle.

In those days the whole Church joined in prayer for the Pope and the Lord sent an Angel of Deliverance, Saint Michael the Archangel, who broke Peter out of prison.

Pope Benedict XVI is also imprisoned, in that he is manipulated and controlled by others who fear the power of the office which they know He still has, whether he realizes it or not. It is not for nothing, that Saint Michael the Archangel was appointed to be the Patron of the City of Rome. He has ever been active to defend the Pope, and even now summons God’s servants to the Eternal City to defend him. Let us join in prayer with this great Archangel for Pope Benedict’s liberty, safety and protection, against all the forces of darkness which are being conjured together at the Vatican.

And let us not only pray, but let us do something about it! For if we only pray, when we are able to do more than just pray, the Lord will condemn us for sloth.

As president of Ordo Militaris Inc., I personally ask each of you to join the Order by making a small monthly capital pledge or an investment. I want the Order to be able to offer Pope Benedict XVI our assistance in any need he has, but I cannot do that without your help!

And let us take confidence in the inspired word of God, which shows what happens to those who imprison Christ’s Vicar on Earth!

1] And at the same time, Herod the king stretched forth his hands, to afflict some of the church. [2] And he killed James, the brother of John, with the sword. [3] And seeing that it pleased the Jews, he proceeded to take up Peter also. Now it was in the days of the Azymes. [4] And when he had apprehended him, he cast him into prison, delivering him to four files of soldiers to be kept, intending, after the pasch, to bring him forth to the people. [5] Peter therefore was kept in prison. But prayer was made without ceasing by the church unto God for him.

[3] “Azymes”: The festival of the unleavened bread, or the pasch, which answers to our Easter.

[6] And when Herod would have brought him forth, the same night Peter was sleeping between two soldiers, bound with two chains: and the keepers before the door kept the prison. [7] And behold an angel of the Lord stood by him: and a light shined in the room: and he striking Peter on the side, raised him up, saying: Arise quickly. And the chains fell off from his hands. [8] And the angel said to him: Gird thyself, and put on thy sandals. And he did so. And he said to him: Cast thy garment about thee, and follow me. [9] And going out, he followed him, and he knew not that it was true which was done by the angel: but thought he saw a vision. [10] And passing through the first and the second ward, they came to the iron gate that leadeth to the city, which of itself opened to them. And going out, they passed on through one street: and immediately the angel departed from him.

[11] And Peter coming to himself, said: Now I know in very deed, that the Lord hath sent his angel, and hath delivered me out of the hand of Herod, and from all the expectation of the people of the Jews. [12] And considering, he came to the house of Mary the mother of John, who was surnamed Mark, where many were gathered together and praying. [13] And when he knocked at the door of the gate, a damsel came to hearken, whose name was Rhode. [14] And as soon as she knew Peter’s voice, she opened not the gate for joy, but running in she told that Peter stood before the gate. [15] But they said to her: Thou art mad. But she affirmed that it was so. Then said they: It is his angel.

[16] But Peter continued knocking. And when they had opened, they saw him, and were astonished. [17] But he beckoning to them with his hand to hold their peace, told how the Lord had brought him out of prison, and he said: Tell these things to James, and to the brethren. And going out, he went into another place. [18] Now when day was come, there was no small stir among the soldiers, what was become of Peter. [19] And when Herod had sought for him, and found him not; having examined the keepers, he commanded they should be put to death; and going down from Judea to Caesarea, he abode there. [20] And he was angry with the Tyrians and the Sidonians. But they with one accord came to him, and having gained Blastus, who was the king’s chamberlain, they desired peace, because their countries were nourished by him.

[21] And upon a day appointed, Herod being arrayed in kingly apparel, sat in the judgment seat, and made an oration to them. [22] And the people made acclamation, saying: It is the voice of a god, and not of a man. [23] And forthwith an angel of the Lord struck him, because he had not given the honour to God: and being eaten up by worms, he gave up the ghost. [24] But the word of the Lord increased and multiplied. [25] And Barnabas and Saul returned from Jerusalem, having fulfilled their ministry, taking with them John, who was surnamed Mark.

FROMROME.INFO ASKS YOU TO JOIN
THE LEAGUE OF PRAYER FOR POPE BENEDICT XVI