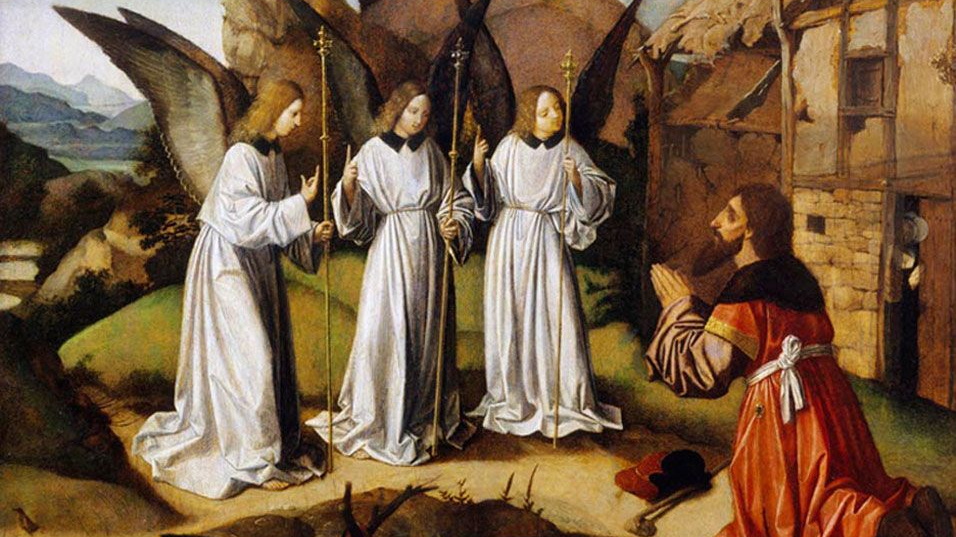 As Scripture recounts, there comes a time when the sins of mankind are just so great that God’s silence and merciful patience come to an end and He lets lose punishment.

God being of Infinite Power, His Punishments can be most terrible.

God being the Author of Nature can command the forces of the natural world to do things which are uncommon, unusually, apocalyptic and above all inescapable.

But there are some trials and punishments which can be avoided, even if God has decreed them for entire cities, peoples, nations etc..

We see this in the response to the prayer of Abraham, who being shown the destruction of the cities of the plain, asked God to show mercy. And that God in His Mercy sent 2 Angels to rescue Lot.

Who are those 2 Angels of Mercy?

We know from the Fathers of the Church that the three Angels who visited Abraham were the Holy Archangels, Michael, Gabriel and Raphael.

As an aside, I hope you never saw the blasphemous movies and TV shows which denigrated these Holy Angels and made it appear that they were selfish, jealous or evil, like thet godless blasphemers who wrote these scripts are.

These Archangels, on the other hand, in truth and reality are most Noble, most Good, Most Zealous, and Most Faithful, and most determined to lead us to Heaven where we and they can rejoice in the true God, Father, Son and Holy Spirit, for ever and ever.

To discern who those 2 Angels were, is important, because in times of great woe, we too need to turn to the Holy Angels to recuse ourselves and our families from the great punishments of God which descend upon the whole land round about us. And if we are faithful Catholics, we can ask this help, because God does not wish to punish everyone.  But since this is a special grace, which we cannot merit without asking, we need to ask for it and know whom to ask.

To give you an example. A friend of mine told me recently that he has fallen 3 times in the last year and hurt his foot, leg and knee.  He asked me why, as a faithful Catholic, is this happening to him. I told him I am not a doctor, but I asked him if he had a devotion to Saint Raphael the Archangel. He said he did not. He only was very devoted to Saint Gabriel. Oh, I said, that explains it! Saint Raphael is the patron of travelers, and if you are having problems as you walk, your lack of devotion to Saint Raphael is undoubtedly the reason. I mean what I say, because I know it is true.

When my dear and beloved mom, was in her last year of life, she began to lose her balance and lose her fear of falling. She would wander the house at night-time and sometimes she would fall down. I was very concerned and so I started praying to Saint Raphael for her.  From then on, she never fell, except on one occasion and was miraculously protected. She had wanted to go to daily mass, and after helping her out of the car onto the sidewalk, I returned to shut the doors of the car. And she fell right down on the hard concrete, with a boom. I was shocked and dismayed. So I helped her up and asked if she had hurt herself, and she said no. So I steadied her and continued to close the doors of the car. And she fell again. Boom. I was terrified. I helped her up and asked her again if she had hurt herself. She said no. In subsequent days we checked her carefully and she did not even have a bruise! Saint Raphael had come to her aid.

Saint Raphael is the most famous of all the Archangels in the Bible. He has an entire Inspired book of scripture about him. It is called the Book of Tobias, and you can find it in the Vulgate version of the Bible. Do not read the book of tobit which is a mutilated copy of Tobias to which superstitions of  pre-Christian Jews has been added. The Book of Tobias was redacted by Saint Jerome and is one of the books most cited by Our Lord in His preaching.

Saint Raphael is the special patron of travelers and of the sick. Everyone should have a devotion to him, for both reasons. Tobias tells us that this Holy Archangel is one of the seven Seraphim who stands before the Throne of God in Heaven. For these reasons, I hold that one of the two Angels sent to Lot is Saint Raphael, since they were sent on mission, to rescue Lot and his family from an impending apocalyptic destruction, which required great knowledge and power to fulfill.

The other Holy Archangel, who is undoubtedly a Seraphim, and whom Scripture tells us is probably one of the two Angels send to rescue Lot, is Saint Michael. Saint Michael is the Angel of the Lord, according to the Saints. His job was to meet out destruction to armies and nations, and to lead the Chosen People out of Egypt, across the Red Sea and to the promised land. He brought forth water from the rock at the command of Moses, he guarded by a column of smoke, so that the enemies of God could not see His people. He led God’s people by a column of fire at night, so that they could see their way in a dark land.

The Saints say Saint Michael is responsible for miraculous springs of water and he has ever been invoked at springs to cleanse them from impurities. He is also the Angel which strikes wicked men and cities and lands with plague, as we read of in Scripture, under his title as, The Angel of the Lord, and in history, as happened here at Rome in the reign of Pope Gregory the Great.

So for all these reasons, I believe that Saint Michael is the other Angel of Mercy.

If you want protection in this time of universal madness, you can do no better than having a devotion with these two Great Archangels. And you can do so, by first asking them pardon, humbly, for lacking in devotion to them, resolving to have devotion from now on and for the rest of your life, and by saying some approved prayers to them on a regular basis. Finally, entrust yourself and your family’s protection to them.

But none of this  will obtain their friendship if you do not first confess all your sins and resolve to be faithful to God, because the stain of sin on the soul is like the smell of shit in the pants of someone standing hear you. It makes you repulsive to the Angels of God and difficult for them to endure hearing your requests. So get yourself to confession!