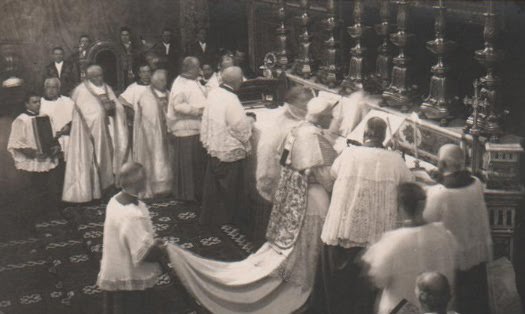 The fundamental principles of the Code affirm the liturgical traditions of the Church and require that the code be understood as such.

We can see this from Canon 2, which reads in Latin:

Which in English translation says:

Canon 2 :  The Code does not for the most part define the rites, which are to be observed in celebrating liturgical actions: on which account the liturgical laws in force up to now retain their vigor, unless any of them be contrary to any of the canons of the Code.

Here the determinative term in the Code is “liturgical laws” (leges liturgicae). In the Roman Rite, as has been observed by many: the new form of the mass, the Novus Ordo, had been celebrated for 13 years at the time the new Code of Canon Law was promulgated in 1983. As such it had not yet obtained any force of law by mere custom, which requires 30 years (canon 26). It also had not the support of a papal law, since Pope Paul VI in 1969, when publishing the decree, Missale Romanum, neglected to give the new form of the mass the force of law, leaving only minor aspects of the Missale to be determined by his decree and significantly — by the Hand of God — leaving unsaid in a legal act his will that it be imposed or become law (cf. canon 37).

Hence, canon 2, must be read as requiring the decree, Missale Romanum of St Pius V, to remain in force, since it was the principle liturgical law still enforce at the time the new Code was promulgated. We see this affirmed in part by the motu proprio, Summorum Pontificum, of his Holiness Pope Benedict XVI, which says the ancient liturgy was never abrogated. Those who argue, that that same decree gave force of law to the new liturgy, have little to argue upon, since in it Pope Benedict limited himself to affirming the facts of law, not in promulgating new ones. That he recites a history of liturgical innovations since the reign of Pope John XXIII determines nothing, because a narrative is not a law or legal decree.

In this, we see that Pope Benedict XVI was simply manifesting the intent of John Paul II in promulgating the Code. The authentic meaning is for tradition, and all other canons need to be read in that light, in virtue of canon 17, which as has been often said here at the From Rome blog, requires that all canons need to be read in the light of canonical tradition and the mind of the legislator and their proper senses.  Since the liturgical innovations of Paul VI were not yet law or customary law in 1983, they cannot be appealed to in the reading of any canon in the present code, and those who do so are violating canons 2 and 17.

Finally, the most important thing to remember, when there arises any controversy over the liturgy at the canonical level, is that the context of the New Code approves the Ancient Liturgy. Never cede to the revolutionaries or those duped by the practice of putting praxis above law and custom, that the New Code upholds the innovations.

And in English says:

Canon 938: §1 Let the Most Holy Eucharist be habitually reserved in only one tabernacle of the church and/or oratory.

§2. Let the tabernacle, in which the Most Holy Eucharist is reserved, be situated in some conspicuous, fittingly ornate part of the church and/or special oratory, (which is) apt for praying.

§3 Let the tabernacle, in which the Most Holy Eucharist is habitually reserved, be immovable, constructed of non transparent solid material, and so closed that the danger or profanation be most of all prohibited.

§4 For grave cause, it is licit to reserve the Most Holy Eucharist, especially at night time, in some safer and decorous place.

§5 Let he who has the care of the church and/or oratory, take care that the key to the tabernacle, in which the Most Holy Eucharist be reserved, be most diligently guarded.

Now let us examine this Canon carefully to understand what it means and does not mean.

Now, if we read this canon in the light of canon 2 and canon 17, which require us to understand it in continuity with liturgical and canonical tradition, we can see that it in no way at all abolishes the usage which was common for centuries of having a tabernacle on every altar (ad orationem), a tabernacle for principle reservation of the Sacrament and a tabernacle in a secure place, such as the Sacristy, for security.

In fact, when one recalls that Pope Pius XII magisterially taught that to separate the tabernacle from the altar would be an error,* we can see from canon 17, that canon 938 must be understood to include the obligation that at least the tabernacle for prayer (ad orationem) be situated upon an altar. That means, that in § 2 of Canon 938 it is requiring that it be upon an altar. And that canon 2 and canon 938 §2 is allowing it also to be upon the High Altar and every altar where public prayer is offered (ad orationem), since there is no greater praying that at the Altar where the Mass be offered.

Thus this canon in no way causes or requires that other tabernacles not be used or be removed. And if anyone order that a contrary practice be executed, then the subject receiving such an order has the right to refuse its execution. If the order be given verbally and not in writing, then the subject can refuse to comply on the grounds of canon 40, which makes all compliance invalid prior to receiving the administrative act in written form. He may, but is not required, then ask that a rescript first be granted (canon 60) codifying in written form and a legal act the order. If the order be given in writing or by rescript, then if the written act does not contain reference to a grant of authority (to the one commanding) to derogate from canon 2, 17 or 938, then the one receiving the written command can refuse it on the grounds of canon 41 and 38, namely, that such an act is nullified in virtue of canon 38, because it runs contrary to the law of canon 938, and that thus in virtue of canon 41 the one receiving such a command can omit its execution.

* Pius XII, Allocutio, Assisi, Sept 22, 1956: “To separate tabernacle from altar is to separate two things which by their origin and nature should remain united.” (complete text here in PDF)