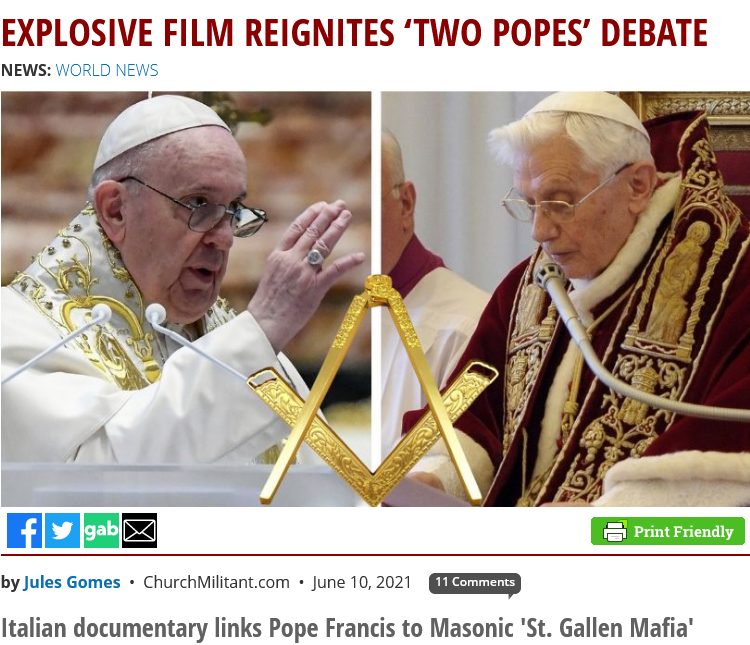 The above is in print, and the below on TV in the next 90 minutes.

Get the latest tonight on the secret group of liberal cardinals known as the St. Gallen Mafia. 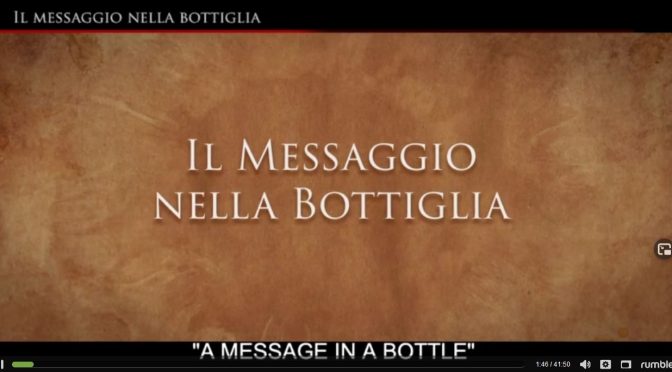 This is the Mafia of St. Gallen busting documentary which unmasks for the first time all the actors involved in the journalistic and canonical manipulation of the events of Feb. 2013, at the Vatican, in the context of the history of the Vatican during the last 60 years.  Produced in the Italian language, it is now republished here with English subtitles.

In this video, we are confronted with, the precise historical facts of Feb. 11, 2013 and the undeniable and undenied evidence, against which no argument can be made, now for all the world to see.

Was there a conspiracy to oust Benedict? Who was part of it? What is the evidence? Do they admit what they did? Did they attempt to hide the evidence and cover their tracks? — These and a myriad of other questions find in this one documentary, Il Messagio nella Bottiglia, a treasure trove of evidence in documents and film, for the first time.

The importance of this documentary cannot be underestimated. So, Share this with every Cardinal, Bishop, Priest, Deacon, Seminarian, Religious, Parishioner, Relative and Friend.  These are the facts of which the entire Catholic World has a right to know.

Whether you have heard of doubts and theories about why Benedict resigned or not, this documentary is a good place to begin a rational and forensic examination of the evidence. To all who still have eyes to see and have a mind open to the truth, Il Messagio nella Bottiglia — The Message Left in a Bottle — will be a point of reference for the whole Church on the questions and controversies which swirl about the events of Feb. 11, 2013.

This highly professional, 45 minute documentary is in Italian, but English subtitles will be available by D Day: Sunday, June 6th. It has been in the making for 9 months and launches tonight in Italy.  — It sets out all the facts and lets the reader decide. It will be a battering ram to the Mafia of St. Gallen. — The production company is anonymous to protect their careers from the Cancel Culture. — Share it everywhere!

Here is another Italian version, this time on Youtube: