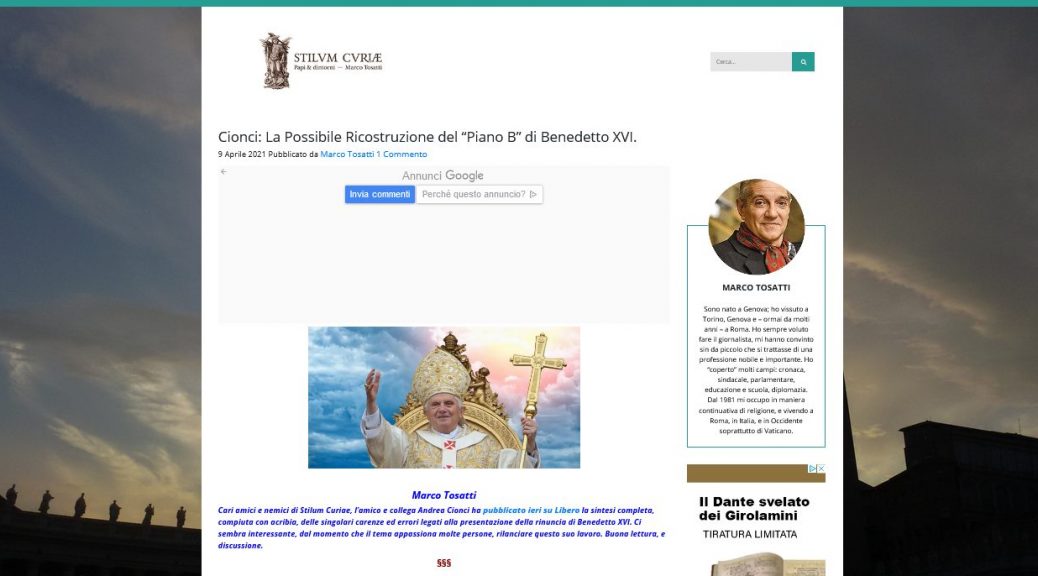 April 9, 2021 A. D: This morning, Marco Tosatti, one of the most senior Vaticanista here in Italy republished Andrea Cionci’s article on Benedict’s Plan B.  While this may not seem to be newsworthy, it merits nevertheless to be brought to the attention of the English speaking world, which has nearly no newspapers, electronic journals or TV channels who are willing even to speak about the incontrovertible anomalies in the reality of what Benedict XVI did and did not do.

Let Life Site News, The Remnant, National Catholic Register and Catholic Family news take note, and let their readers ask them why they are censoring the news.

Let 1 Peter 5, Dr. Taylor Marshall, Church Militant, EWTN et alia, take note of what Tosatti just did, and let their viewers and readers ask them why they are censoring the news.

In this manner, all these groups, knowingly or not, willingly or not, have been coopted into the narrative control of the Globalist Reset, wherein Bergoglio is the new Messiah and Benedict has betrayed humanity.

All these by remaining silent are running cover for the Bishops in the English speaking world who cling to Bergoglio as the sine qua non of the New Normal.  As a consequence, they make all the lies, frauds, crimes, heresies, apostasies and treacheries of Bergoglio possible. If they protest Bergoglio, it is like the man who protests the Scamdemic while wearing a mask and insisting on the vaccine.

Let them and their readers, followers and viewers meditate on that. In the mean time, they can read Cionci in English at FromRome.Info.

On the contrary, Marco Tosatti has the integrity to allow the facts present themselves and the discussions be aired. That does not mean he agrees with them 100%, but it does show that he is not controlled by globalists.

I publicly call on the media in the English speaking world of Catholics to do the same. It is time to stop calling FromRome.Info “unreliable”. After all projection as a psychological trick, is the tactic of Marxists.

CREDITS: The featured image above is a screenshot of Tosatt’s official blog. Click here to read it in Italian.

Dear Mr. Matt, thank you for your public comments at 20:00 in your video here. I invite you, in response to your invitation to a frank and open collaboration against the real problem, to a public live discussion on the Church Crisis. — I do not have your email, so I must make my appeal public. I can do skype or Whatapps.

There is an excellent, and detailed analysis, of the Pope’s Sunday Homily to the College of Cardinals, by Megaera Erinyes at the Remnant, which begins thus:

Pope Francis’ homily for the latest consistory of cardinals meeting in Rome this week is being called a re-statement of his programme for his pontificate. Fr. Thomas Rosica, his English language spokesman, wrote on Twitter: “More than anything I’ve heard from (the pope) today’s homily is his mission statement.”

Let us assume for a moment that the pope knows the implications of what he is saying, and that the people closest to him are telling the truth when they say, repeatedly, that the things that are happening are happening at his behest, and examine what this “mission statement” has to say to the Church.

Francis is clearly signaling, again, his intentions for the Synod and the future envisioned at it by the Kasper faction. The question of Communion for the divorced and remarried is never named, but the terms describing the issue are unmistakable. And they are wholly on the side of the Kasperites, adhering without an iota of divergence from the basic presumption in Kasper’s proposal: that the law of God must be overturned or ignored for the sake of extending the mercy of God. A contradiction that is totally incompatible with all of Catholic theology, with logic and natural reason.

What I hope to offer here is not a detailed theological analysis, but merely a point-by-point clarification, given the context of what the pope means. It can only be described as a volley in an ideological war currently being waged at the highest levels for supremacy in the Church. I will go through the text of the consistory homily and try to add some clarification for those who might be in the position now of trying to explain what some of us see as the grave danger being posed by this pope.

(Continue reading, from the Original)