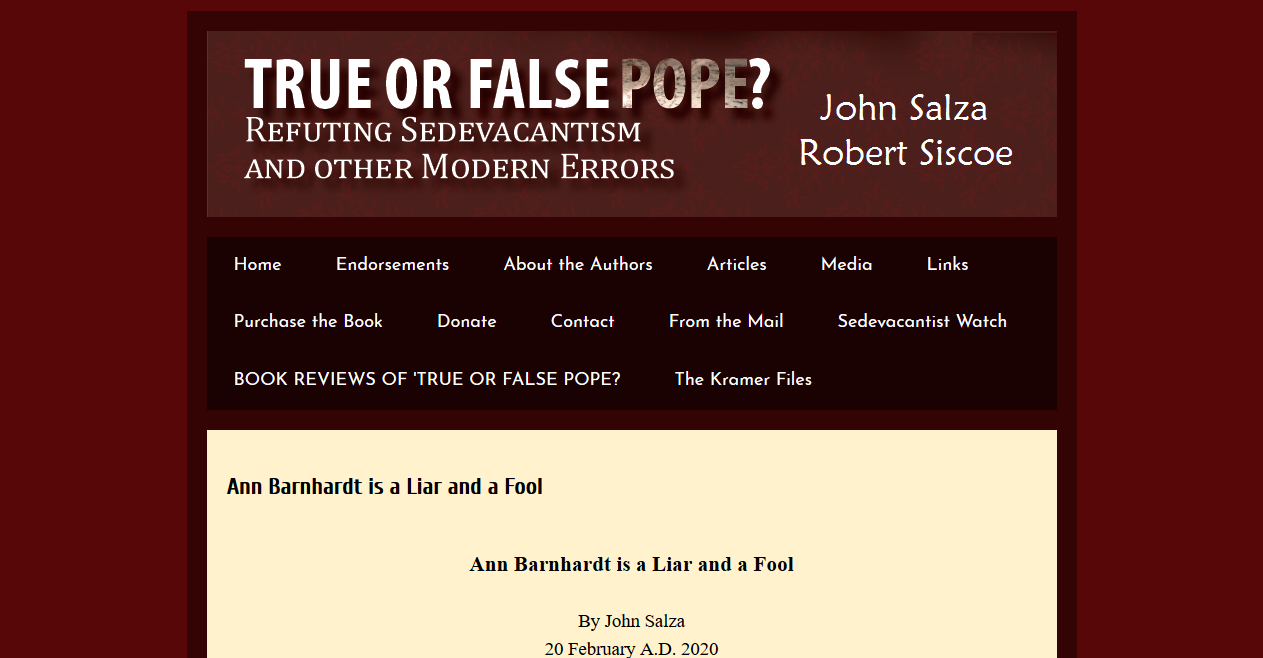 Over at True and False Pope, Mr. Salza has published a reply to Ann Barnhardt full of vile insults, which is most unworthy of any man.

I do not usually comment on blogs, but I decided to join the fray. After soliciting from Mr. Siscoe a clear definition of the theory of Universal Acceptance, I show why that Theory in this case is contrary to Faith, Law and Fact. Here is my reply:

There are major problems with your theory and its application.

First of all, no theory of interpretation trumps canon law, because if it did, then Jesus Christ would be a liar Who said of Peter and the laws of all his successors, Whatsoever you bind upon Earth, shall be bound also in Heaven. Thus if a man were accepted by all in the Church as the pope, when however he had no legitimate claim to the papacy because of the non compliance with any papal law regarding becoming pope, then Christ would be proved a liar.

Therefore, to assert such a theory is applicable in such a circumstance is contrary to the Faith. Therefore, in such a case, if you want to use it, I would have to conclude you are a blasphemer and a heretic, and also a schismatic, since you would thereby adhere to a false pope.

The other problem with your theory is that in the present case, there never was universal acceptance. Bishop Gracida never accepted the renunciation or the election. And I just met about 12 persons at a Conference here in Rome, over the weekend, who told me they did not accept Bergoglio the moment he came out of the Loggia and said, Buona Sera!

The use of this theory of Universal Acceptance in the case of a papal renunciation has been abrogated explicitly by Canon 332 §2, which said that the acceptance of a renunciation by anyone whomsoever is not required for its validity. Therefore, it is not the cause of its validity, nor a sign of its validity. Therefore, to resort to it in the present case is to be a rebel against the papal law, and thus to be condemned by Unam Sanctam, because it is a grave duty of the Faith that we be subject to papal laws and to the true pope.

Finally, you resort to this theory of Universal Acceptance because you manifestly reject to accept the norm of Canon 332 §2 which defines the essential juridical act as a renunciation of munus, which never occurred. Nor can you legitimately read munus where ministerium is written in the Declaratio, because as Saint Alphonsus dei Liguori says in his tract on Interpretation of Law in his Theologial Moralis, that such an interpretation would require a positive additional act of the lawgiver. But such a requirement means the original act is not clear in itself. And as Mons. Arrieta of the Pontifical Council of Legal Texts affirmed for me on De. 11, 2019, such a renunciation which is not clear in itself would be invalid.

Please note, that I have used no ad hominems in my response to you. Unlike the comments you publish here which hurl them at me.

I add here, not at the other blog, that the use of the theory of Universal Acceptance is the last resort of the willfully blind. Because everyone trained in law knows that the validity of a juridical act has nothing to do with whether it is accepted as valid or not.

I will admit, here, however, that I only read True or False Pope Blog, because the authors of it admitted in substance that they did solicit the financial support for the Fatima Center and that the requirement of the donor was that the center be purged of anyone who held the opinion of Father Gruner, that Benedict was still the Pope.

So, here, I will ask Mrs. Siscoe, Salza and Ferrara a public question: Did any of that financial support arrive in your pockets directly or indirectly? And was it given before you adhered to the theory of universal acceptance?

Finally, it does not surprise me that the authors of the Book True or False pope cannot comprehend the present Church Crisis, in which we have both a True AND a False pope. When you begin with a false premise which you use as a principle of epistemology, then you have blinded yourself from the outset.

CREDITS: The Featured Image is a screenshot of the blog mentioned in this article and is used here in accord with fair use standards for editorial commentary.