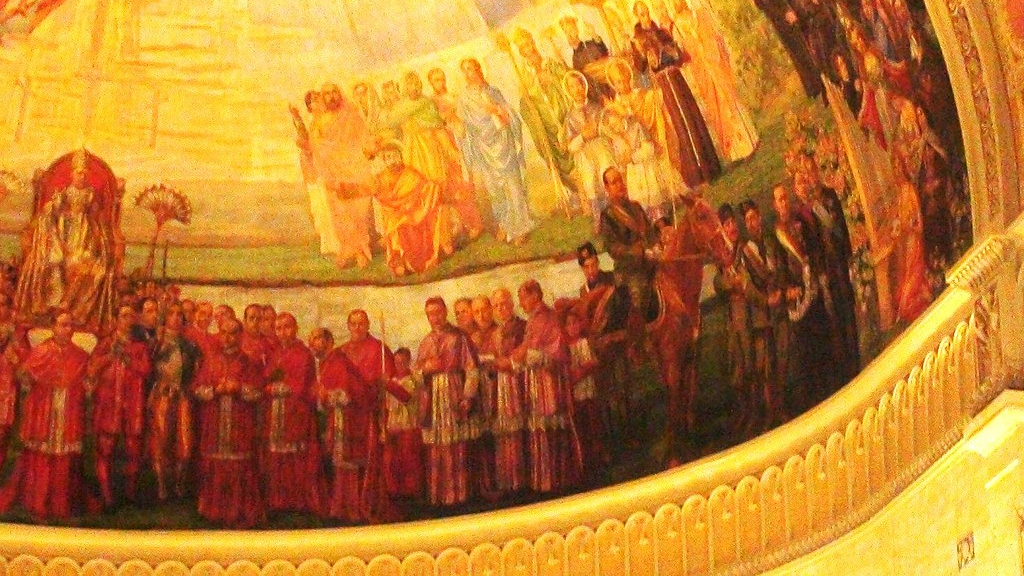 Despite the attempts of all pro-Bergoglian apologists to make it appear that questions about his illegitimacy are merely caused by the aberrant subjective psychological state of his critics, his usurpation of the Office of the Roman Pontiff is a real legal crime of the highest order and has grave consequences on the international relations of all states with the Vatican.

First of all, with the Italian Republic, on account of the terms of the Lateran Pact of 1929, which was signed between Pope Pius XI and Mussolini, and celebrated with a fresco in the Church of Notre Dame de la defence, at Montreal, Canada of all places, with an image of both the Pope and Mussolini (on horse back) being watched over by the Saints of Italy from Heaven.

The Lateran Pact ended the near 70 stand off between the Apostolic See and the Kingdom of Italy, over the forced and illegal annexation of the Papal States and theft of ecclesiastical property throughout the Italian peninsula. Among its more well known terms was that the Kingdom of Italy would pay an annual sum to the newly recognized State called, Vatican City, without calling the payment reparations.

Other terms are nearly unknown of, outside of Italy. Lets examine a few of them and see how the usurpation of the Vatican by the St. Gallen Mafia gravely violated and violates their observance. (For the facility of our readers, we will quote the Lateran Pact in English translation, from this source.) My comments will be in Italics.

The sovereignty and exclusive jurisdiction over the Vatican City, which Italy recognizes as appertaining to the Holy See, forbid any intervention therein on the part of the Italian Government, or that any authority other than that of the Holy See shall be there acknowledged.

This article requires the Italian State to prevent the government of the Vatican City being overthrown by all enemies, foreign or domestic, and to prevent that from happening through the intervention of any foreign power, such as the United States of America through Obama bribing or coercing Cardinals.

For the purpose of the execution of the provisions of the preceding Article before the present Treaty comes into force, the Italian Government shall see to it that the territory forming the Vatican City shall remain free from any charge and from possible occupants. The Holy See shall arrange to enclose the access thereto, enclosing such parts thereof as remain open, except St. Peter’s Square.

This Article requires the Italian State to prevent any foreign occupation of the Vatican City State and liberate it from such domination.

This Article requires that the Italian State defend the person of the Roman Pontiff as if he were a head of state in Italy, and to defend his person and honor from verbal attacks.

The effects of the Usurpation

On account of Bergoglio’s de facto claim to the office of Roman Pontiff, Italy is gravely bound to ascertain that claim as valid before undertaking any cooperation with the government of the Argentine Jesuit.

But as has been amply proven according to the norm of Canon Law, Bergoglio has no such legitimate claim. Therefore, the Italian Republic is de facto having relations with an illegitimate foreign criminal mafia which has unlawfully taken control of the Vatican government. This is a grave violation of Articles 4 and 5 of the Lateran Pact.

Also, inasmuch as the true Pope, Benedict XVI, is being unlawfully detained, manipulated, coerced, imprisoned, perhaps even drugged and physically abused — NOT TO MENTION nearly universally derided and insulted by the allies of Bergoglio in the Italian press and media, the toleration of these things is a grave violation of Article 8 of the Lateran Pact.

It seems, therefore, since the legal argument against Bergoglio’s claim is entirely sound and incontrovertible that a legal contestation of the legality of the Italian Government showing or proffering any sort of recognition to the Bergoglian regime in the Vatican City State is certainly actionable.  It also appears that all officers at any level of government in the Italian Republic would have the grave duty to initiate legal action for the misappropriation of funds, services and manpower from the different Ministries of the Italian Government, which act as if Bergoglio is the Roman Pontiff.

Furthermore, it appears, that with the legal case won in Italian Courts, the Italian Republic will have the grave moral duty to liberate Pope Benedict XVI by armed miliitary force and to seize and apprehend Bergoglio and his supporters, inside and outside the Vatican, who may be in Italian territory, or flee thereto, to put them into custody and to punish them in accord with Article 22 of the Lateran Pact, which reads as follows:

At the request of the Holy See, or by its delegate who may be appointed in single cases or permanently, Italy shall provide within her for the punishment of offences committed within the Vatican City, save and except when the author of the offence shall have taken refuge in Italian territory, in which event he shall immediately be proceeded against according to the provisions of the Italian laws.

The Holy See shall hand over to the Italian State all persons who may have taken refuge within the Vatican City, when accused of acts committed within Italian territory which are considered to be criminal by the law of both States.

The same provisions shall apply in regard to persons accused of offences who may have taken refuge within the buildings enjoying immunity in accordance with the provisions of Article 15 hereof, save and except if the persons having authority within such buildings prefer to request members of the Italian police force to enter and arrest such persons.

CREDITS: The Featured Image above is a photo of Guido Nichieri’s Fresco in the Nave of the Church of Notre Dame de la Defence, in Montreal, Canada, celebrating the signing of the Lateran Pact, and is used here under a Creative Commons Share-Alike 2.0 License as described here.