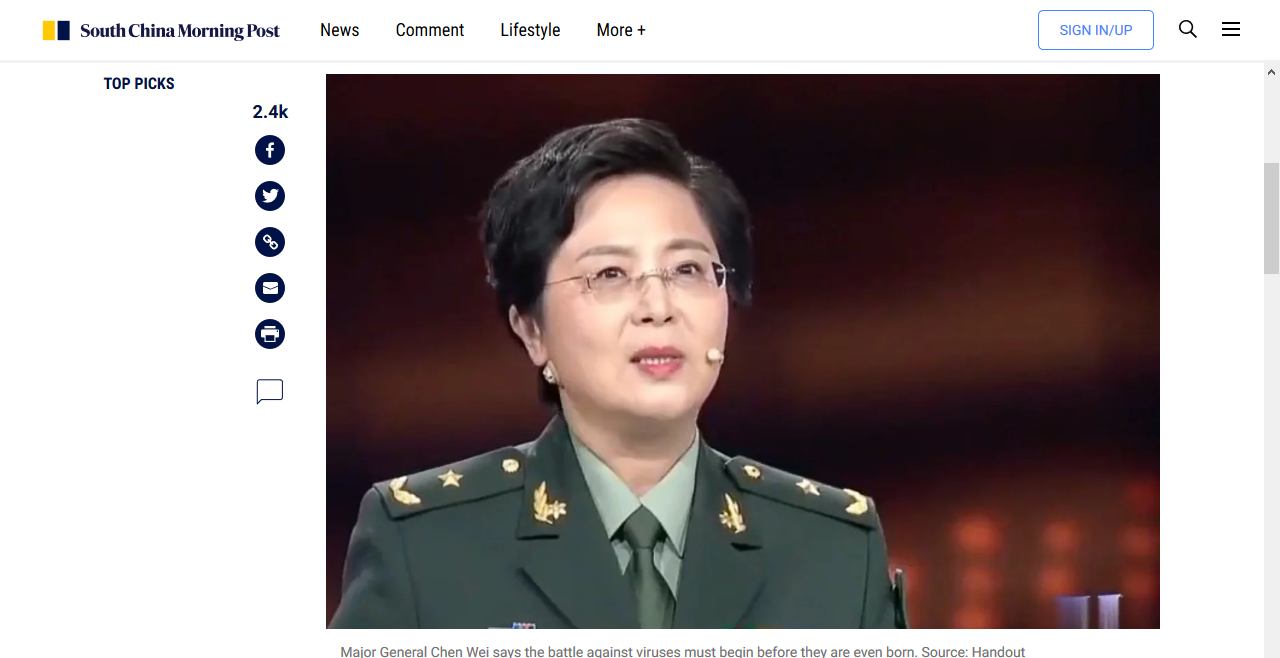 The Corona virus — which is called the Coronavirus, here in Italy — shows signs that its real name should be the Wuhan virus, and that was intentionally modified in the level 4 biowarfare laboratory in Wuhan China.

In this article, I will recite the evidence,  not the conspiracy theories.

In an article published by the Express on March 10, by Callum Hoare, geneticists publishing in ScienceDirect are reported to have discovered that the Wuhan virus has a particular and unheard of capacity to attach to a specific protein (furin) found in the lungs of humans.

This is not naturally occurring, because a virus cannot learn genetically to attach to a protein unless the protein is in its natural environment. And if the virus, as has been claimed, is 96% the same genetically as corona viruses in Chinese Bat populations, then it would have been impossible for it to acquire this function, unless it was living in a human host or in an animal which ate human lungs or had the same protein.

Dr. Pek, and eminent molecular biologist from the Czech Republic also is of the opinion that the virus has features which show human design or intervention in its genetic code, according to a report on Czech TV.

In an article published by the New York Post, on Feb. 22, Steve W. Mosher reviews multiple indications that this virus is not naturally occurring but is the product of research into Biological Warfare. He writes:

The evidence points to SARS-CoV-2 research being carried out at the Wuhan Institute of Virology. The virus may have been carried out of the lab by an infected worker or crossed over into humans when they unknowingly dined on a lab animal. Whatever the vector, Beijing authorities are now clearly scrambling to correct the serious problems with the way their labs handle deadly pathogens.

The Wall Street Journal, in an article published, on March 5, confirms that the Wuhan BioWarfare level 4 lab was intimately involved in the initial response to the Corona Virus outbreak, being desribed as being in the “forefront” of the response and for its “fast identification” of the virus.

Finally, I highly recommend watching the Video report at the Epoch Times, which ties these other reports together and reports that a scientist at the Wuhan BioWarfare Lab in 2015 admitted in a published paper in having achieved the modification of a Bat Coronavirus for human transmission.

Seeing that Wuhan Virus is especially likely to target elderly men with poor immune responses, it thus cannot be discounted that the Virus was intentionally transmitted to Europe for the purpose of attacking the clergy of the Catholic Church, which is considered the arch enemy of the Communist Regime in China.

Indeed, a bioagent which attacks mostly men over 50 years of age, would be a suitable weapon to take out the command and control of an opposing military force in the time of war.  Alas, the virus, having been brought back to Iran by a government agent on visit in China, has succeeded to do that among leading Iranian politicians, according to a report by the Jerusalem Post, on March 11, by Seth Franzmann.

CREDITS:  The Featured Image is a screen shot of the webpage of the South China Times’ article praising General Ghen Wei, and is used here in accord with fair use standards for editorial commentary.