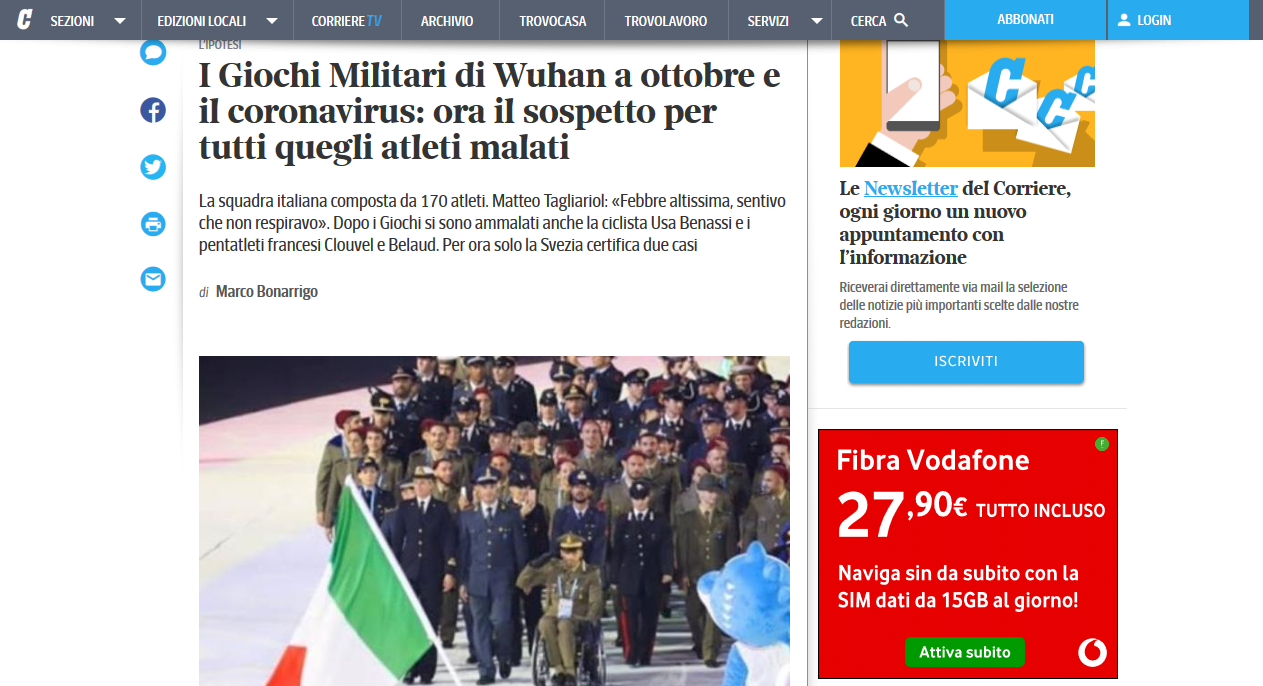 This story, which FromRome.Info wrote about last week, has now exploded, with athletes speaking out all over the world. The Corriere della Sera ran a major article today on the topic, by Marco Bonarrigo, entitled, I Giochi Militari di Wuhan a ottobre e il coronavirus: ora il sospetto per tutti quegli atleti malati. Among those who give testimony is the Italian Fencing Athlete, Matteo Tagliariol.

In the video above, he says 50% of all the athletes came down sick. And when news broke in Italy in February, 2020 of the Coronavirus, they spoke together and agreed they might have caught it there.

Here is an English translation of the key part of the Corriere’s report. Bonarrigo, writes:

On the Italian front, the Gazzetta dello Sport Thursday reported the testimony of Matteo Tagliariol, gold in the individual sword in Beijing 2008, one of the 170 Azzurri present at the Military Games. The airman said: “When we arrived in Wuhan we almost all got sick. But the worst was the return home. After a week I had a very high fever, I felt that I wasn’t breathing. The sickness didn’t even go away with antibiotics, I recovered after three weeks and remained debilitated for a long time. Then my son and my partner got sick. When they started talking about the virus, I said to myself: I got it too”. No comments at the moment from military sports groups but no tests have been carried out on the athletes who took part in the expedition. In the meantime, a small controversy has also broken out. “When we arrived in Wuhan, almost everyone got sick. I had a cough, a lot of coughing. Valerio Aspromonte was in bed almost all the time. Many of them had a fever, even if not very high.” So Matteo Tagliariol had told of his arrival in the Chinese town.

CREDITS: The Featured Image is a screen shot of the article by Bonarrigo, used here in accord with fair use standards for editorial commentary. The video is from Youtube Channel of the Repubblica, a major newspaper at Rome.