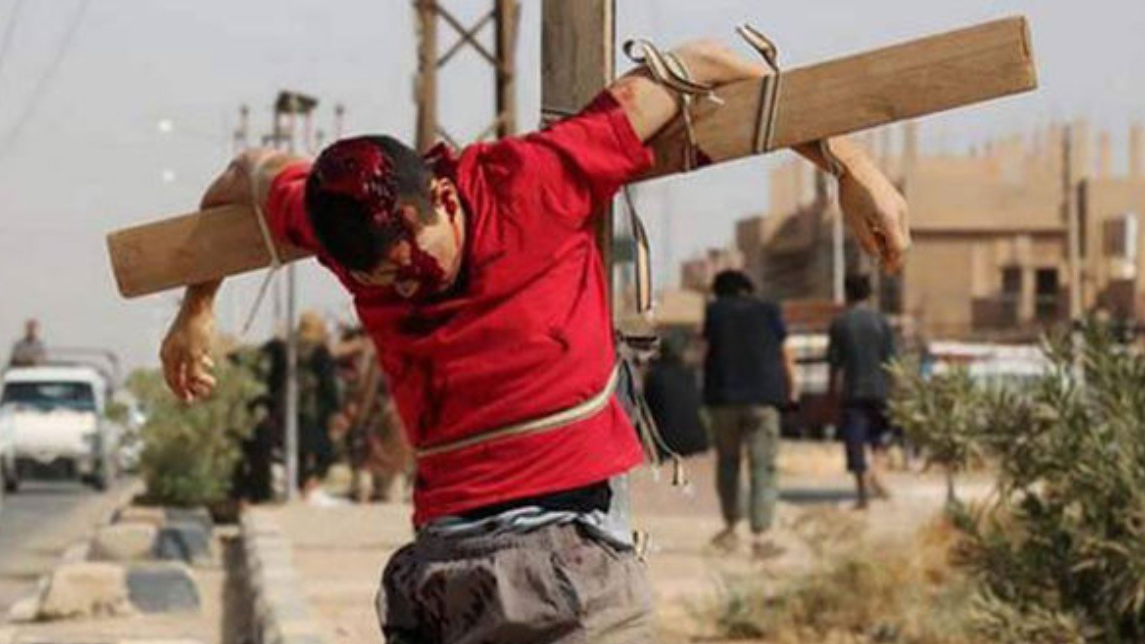 A Letter to the Readers from the Editor 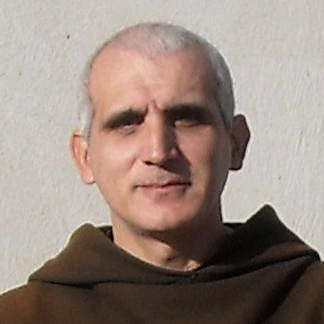 Since September 11, 2001, Catholics have had many occasions to be shocked back into the reality of life. As Christians there are those who want to persecute us, kill us and exterminate our religion.

This is especially easy to understand if you speak Arabic, because then you can actually hear the words of terrorists themselves and see against whom they direct their greatest hatred.

The actual object of hatred of Islamic terrorists are not white men, not Americans, nor Westerners. They are rather, in their own words: Crusaders.

And as every knows, Crusaders were Catholics. They were not protestants, secularists, atheists, Jews, Hindus or Buddhists. I do not doubt that Islamic terrorists also target these groups, but its the word, “Crusader”, which gets them most riled up.

In this, the Catholic world needs to take note. If Islamic Terrorists, who are truly lead by a most evil ideology, hate Crusaders so much, it must be that Crusaders are really something great and wonderful. You won’t hear this stated on other websites, however, because as I said the secularists hate us Catholics just as much, though in a more passive aggressive way.

However, if you have not paid attention in the last 19 years, you may not know that a lot of groups of Islamic Terrorists are armed and funded and sometimes even trained by western intelligence agencies. Osama bin Lade, the founder of Al-Quaeda? Yes, a CIA trained guerilla. Abu Bakr al-Baghdadi, the founder of ISIS? Yes, a captured, released, trained and funded CIA operative. This is not conspiracy theory, there are reams of documents showing Obama knowingly and willingly funded and supported ISIS before it went rogue and conquered Mosul. And that is why many nations welcome back with open arms, their own citizens who fought with ISIS, rewarding them with housing and benefits.

And this is the point of my editorial. If Catholics want to be defended in their persons, their families, their Churches, they need to organize themselves to do it. And thankfully, in modern times, there is a legal way to do this. It is called a private military or security company.

So, when the Lord asked me to do something about this, I founded such a company in the USA. It is called Ordo Militaris Inc.. I named it with a Latin title to recall the first 2 words in the names of every Catholic Military Order in history. I did this because I wanted to revive and return to the authentic Catholic notion of organized self-defense. And I founded a company not a religious order of knights, because the race of nobility is pretty much spent, and there are a lot more non-nobles who are Catholics than Catholic nobility. Also, because in modern law, corporations exist, but religious orders of knights are a category which has no possible legal existence as such. 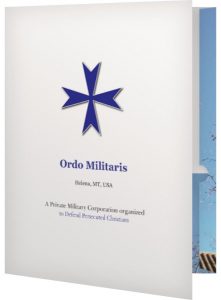 Do you see how you are being played? to lie down and surrender? This is the Masonic long game in subduing Catholics. And they are pledged to it.

But there is a third option, and it only exists, so far, with Ordo Militaris Inc.. In this company you can invest your Catholic money in a corporation which is controlled by Catholics which has the capacity in law to train Catholic men in the military arts and organize them to defend Catholics from persecution, from whatever quarter that comes. While for the most part this means security and defense work in the West, it also can lawfully include helping Catholics defend themselves militarily from terrorists in other parts of the world.

But the important first step is founding a Catholic Military Academy to give Catholic men a Catholic military formation: in the form of a Basic Combat Training program for regular and special forces. With that, the Church will have a pool of manpower to defend Herself.

I speak more about this in a recent interview I gave about this, which you can watch here:

But for those who do not have high speed access, and to put in shorter format, I will recapitulate the argument here:

I can already draw upon 8 military trainer veterans of the French Foreign Legion, and I could raise another 300 veterans of special forces. I have all the manpower. command and technical expertise that they learned in the US Military, NATO forces etc., to do the job.

What I lack is investors. Catholics who are red-pilled enough to see that investing in the Down Jones Industrials, Coca-cola, Apple etc., does not lead to the defense of Christendom, and that perhaps Ordo Militaris Inc. is a worthy consideration for their investment.

By incorporating in the U.S.A., I have created an investment opportunity for Catholics round the world, where they can invest in US dollars and in a way which protects their privacy. I have organized two stock offerings for our investors which offers what I believe are special benefits not found in other investment opportunities: such as, that your investments go to capital acquisitions and improvements, and not to salaries (For US Development, Foreign Development). That your investments to to a company which follows Catholic teaching on what constitutes the right of self defense, just war, and the proper and necessary role of Faith in Jesus Christ in all of this. And importantly, that your investments go to solving a problem which no other corporation or religious order, at present, in the entire world, is organized to solve: namely offering security and defense services to persecuted Catholics and addressing the woeful lack Catholics have in knowing how to defend themselves as Catholics and in groups.

You can find more information about investing, at the website of Ordo Militars Inc., through their homepage and the top bar menu of it. 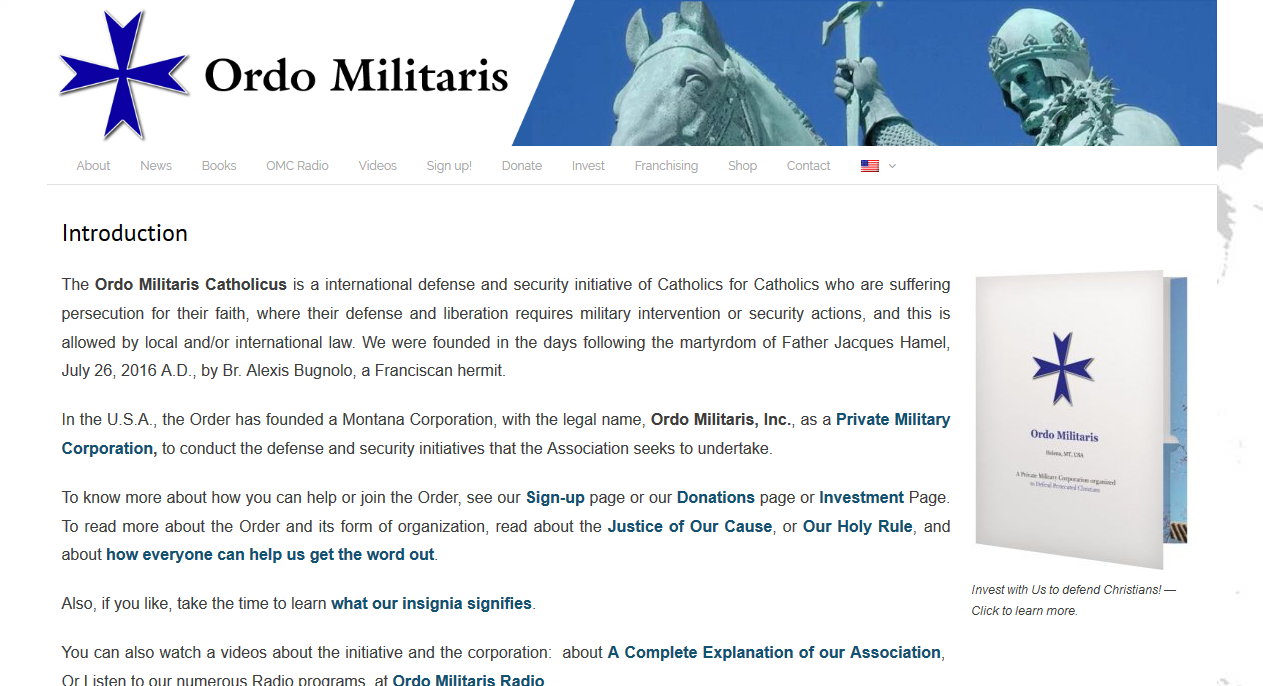 CREDITS: The Featured Image is a photograph, by an unknown bystander, of a Christian who was crucified by ISIS in 2015.

2 thoughts on “Invest to defend Christendom”