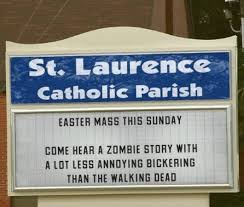 Rome, August 17, 2015 A. D.:  If we wanted to succinctly summarize the nature of the church of the Modernists and compare it to the nature of the Catholic Church which Christ founded, we could do no better than to call it a Zombie church.  For just as a zombie is a dead corpse moved by an evil, unnatural principle, so the church of the Modernists is dead to Christ in virtue of having rejected Him as God and Master, and is moved in pursuit of evil, the exaltation of man unto the contempt of God and all which is from God.

Thus we arrive at a more correct and true understanding of the spiritual and ecclesial battle which is being waged within the visible structures of the Catholic Church today, when we say simply that this war is between the Zombie church and the true Church which Christ founded.

This Zombie church which broke forth into existence at the Second Vatican Council has all the characteristics of a dead corpse:  loss of vocations to the priesthood and religious life, loss of practice of the faith among the laity; ability to parody the words and actions of the True Church before the Council, but always with a sickening and perverse bent which reveals that the principle of life which Christ gave His Church, namely, the Holy Spirit, is no longer present, and a new sinister motivation is at work:  Modernism, under the non-negotiable dictkat of aggiornamento.

Thus, the Zombie church goes through the motions, but its unending, continual, unyeilding purpose and motion is ever downward morally, ever more destructive ecclesiologically, ever more accommodating with the malign trinity of principles which is at work in the world: sin, vice, death.

While the true Church of  Christ, the Catholic Church lives on among the faithful, the little folk, who reject the errors of the Aggiornamento, it is more and more killed off among those who remain in subjection and obedience to the promoters of death and division.  This is effected by the substitution of the notion of faithful obedience to Christ Jesus and the infallible Magisterium of the Church, with a notion of unyielding, self-destructive obedience to the Aggiornamento and the pastoral fallible magisterium of those men who, while holding the public positions of authority in the Church, commit themselves to the agenda of the Modernists, either openly or by silence acquiescence.

The way to victory over the Zombie church is clear as it has always been and it takes only a small group of Catholics with the fortitude of their forefathers to initiate it.  Name the beast, renounce the beast, convoke the faithful together and publicly denounce the errors of modernism and excommunicate the adherents of the Zombie church.

To do this requires that the Catholics who remain faithful to Christ and who reject all which the Zombie Church promotes gather together and publicly act.

Opposed to this are all who demand and insist on continued obedience to the church of the Zombies, to the principles of their unnatural organization and to the continued existence and toleration of them among the faithful, as well as to collaboration with them in anything at all.

The Zombie church will call this “schism”, but separation from the dead is not schism, since spiritually and morally speaking they are not of Christ in anything but appearances. Nay, rather, those who refuse to separate from the Zombie church are those who are dead to Christ, intent on schism with Him.