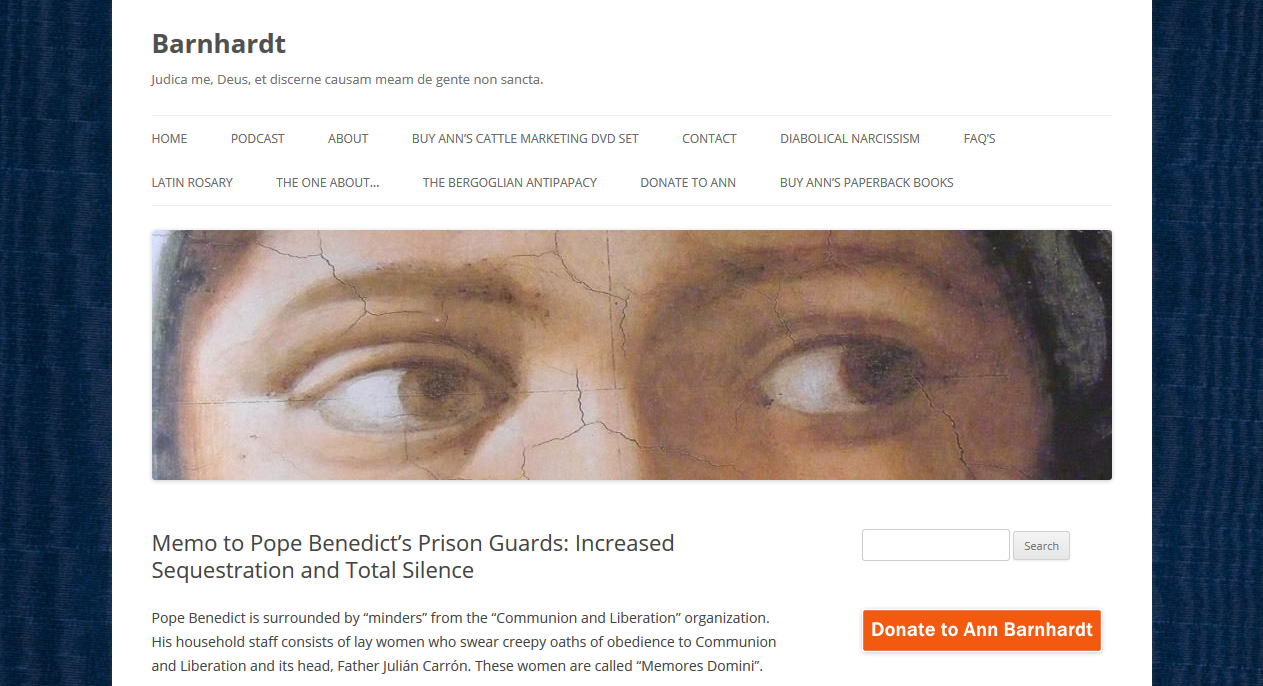 In a truly great piece of investigative journalism, Ann Barnhardt has just published a devastating exposé of what kind of staff have been placed in the Mater Ecclesiae Monastery to monitor, watch and guard Pope Benedict during the last neigh 7 years. As I reported last year, it is clear that Pope Benedict has been imprisoned, in a certain sort of way. Information control is the principal objective. Even George Neumayr admitted this in a piece in The American Spectator, this Sunday past, entitled, The Prisoner of the Vatican.

Barnhardt’s report is astounding. You cannot make this up. Members of a corruption riddled organization with ties to all the money and the power to protect the worst of their own members.

This report is truly troubling. To think of what the Holy Father must have had to endure for nearly 7 years, surrounded by those loyal to his captors, betrayed by all, and not only by his former secretary!

In a post entitled, Memo to Pope Benedict’s Prison Guards: Increased Sequestration and Total Silence, Barnhardt explains the networking behind Memores Domini, the group of women who assist Pope Benedict in all the necessities of the day.

C&L is similar to the Legionaries of Christ in that it seeks first financial power, and is massively financially corrupt. It is also riddled with horrific sexual corruption. It would not be unreasonable to describe C&L as the Italian analogue to the Legionaries of Christ. Both market themselves as “soft-right”, “moderate-conservative” groups in order to maximize their grift, targeting the wealthy “elite” and those with political power. C&L brags that through its top members, it has connection to over €100 billion in assets.

She also quotes an ominous suggestion by a leading member of the same umbrella organization, Communione e Liberazione, who is insisting that Benedict shut up and be put under tighter control.  And I think Barnhardt is correct in her interpretation.

Ann Barnhardt’s personal website, Barnhardt.biz, is a treasure trove of information on the corruption in the Church, and is a highly recommended read. If you want to comment on her article, here below, you are welcome to do so, because her site does not have comments.

CREDITS: The Featured Image is a screen shot of the article at Barnhard’s website. The quotes above are from the original article, and comply with fair use.