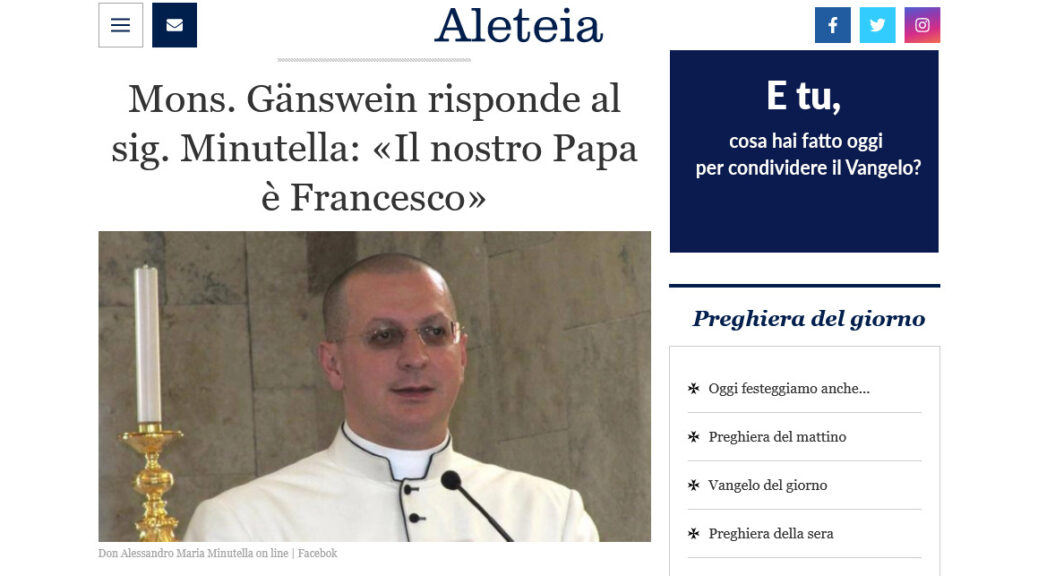 First the Article from Aleteia, which is simply a summary of the reports online, such as FromRome.Info.  Maybe they do read FromRome.Info? But only with eyes shut at any fact or argument which does not fit the tint of their publication , which has been closely associated in its English version with the US Government misinformation program since its foundation. In fact, it seems to be founded to sustain Bergoglio, and its articles are widely ignored or condemned in the USA on social media as unreliable.

Basically, the author of the article without confirming anything, simply repeats the substance of Don Minutella’s live transmission on the morning of Nov. 8, 2022, when he was under the impression that the letter might be authentic. It probably took 15 minutes to write the article.

NOTE: That in the Italian article cited above, there is shown a PDF produced by the software which created the forgery, since it is not a photo taken by Don Minutella!  Therefore, one can conclude that the author at Aleteia knows the forger or is in communication with him. This raises the possibility that a lot more persons are involved than just an errant hater of Don Minutella.

Aleteia itself makes no claim of having verified the letter however, though this is what some are claiming on social media. Aleteia claims on its website to be backed by H.S.H Prince Nikolaus of Liechtenstein., where German is the language of state. So I do not think this article at Aleteia is going to be on-line for long, as it would cause a diplomatic crisis to have the Prince’s reputation sullied by such a claim, as can now be seen from the German version of the forged letter:

Which Cionci, then cites: in a reply, which obviously warns Aleteia of how much they are risking by supporting a forgery:

Translation: “The scoundrels are you and who believes you” — Followed by an image of the German version of the Letter (see image here), where in comment on the form of salutation, the Rubrics read: “One does not use this in German, at least since the Middle Ages, one uses, “sehr geehert Herr”. — Then below, it points out that the forger of this letter in his haste forgot to capitalize the name Francis, as is required in German!

If you agree with Cionci, I suggest you file a complaint to the Ministry of Foreign Affairs of the Grand Duchy of Liechtenstein, here.

I am somewhat confused that Aleteia on its website claims to be founed in Rome, when their foundation is a USA entity, see here. Their HQ is in McLean, Virginia, which has many offices affiliated with the US Government and the CIA. Hmm.