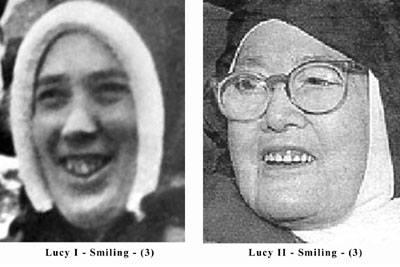 When I first heard of this claim, I thought it was preposterous. But having given the claim a hearing, I found that it was based on a solid scientific approach to evidence with good forensic criteria. After years of gathering information and expert testimonies, it seems indubitable that the real Sister Lucy was replaced.

My colleague, AJ Baalman, over at Ordo Militaris Radio TV, opened my eyes to what was going on in the last 2 years with his investigations into the CIA, which revealed expert sources and documented evidence that the US Department of Defense and CIA and related organizations, such as NATO & their Gladio network, have been working to destroy the Catholic Church since 1953. I recently published one of the key documents about that here.

Their goal was to ideologically confuse and destroy the Church, so that the American Masonic Lodge of Skull and Bones could rob the Church of her moral influence and steal all her properties and systems of government. To do this they needed a new Ecumenical Council which would replace Catholic teaching with a new hermeneutic, or rule of interpretation, which would bend Catholic thought, formation and life, to masonic principles.

But one person stood in their way: Sr. Lucia Santos of Fatima, who had written to the Holy Father, at the direction of Our Lady warning him of calling a Council.

When this suspected replacement theory first appeared, being doubtful, I dug up on the internet the official necrology of the Carmelite Order, and looked up Sr. Lucia, to see if she was listed as dead. And sure enough I found that it listed her as dying c. 1959. When I asked the webmaster how could that be, he said it was a typographical error and removed her entry.

Therefore, I now believe, without a doubt, that the CIA either murdered her, or after her natural death assisted the Freemasons in the Church with replacing her with another, so that the new Lucy could be a spokesperson for the new interpretation of Fatima, which would say nothing about or against Vatican II.

Regarding Dr. Frederick Zugibe, who talked Carlos Evaristo out of his doubts that the imposter was an imposter, it is important to note that Zugibe was an employee of the U. S. Department of Defense, as can be seen from his biography, where it states he was Director of Cardiovascular Research at the Veteran’s Hospital, Pittsburgh, PA, USA. Thus, that Evaristo was directed to speak with Dr. Zugibe would be a curious historic fact, if it were analyzed without the knowledge of the 1953 Declaration of Ideological War against the Church by the U. S. Government and the all too close relationship between John Paul II and the CIA.

In fact, according to my colleague, AJ Baalman, in April of 2002, Dr. Zugibe visited the Carmel in Portugal, where the imposter lived. He gave an interview with EWTN about that, here. The fake Sr. Lucy is alleged to have died on Feb. 13, 2005.

26 thoughts on “Did the CIA replace Sister Lucy, to enable their Vatican II take-down of the Church?”