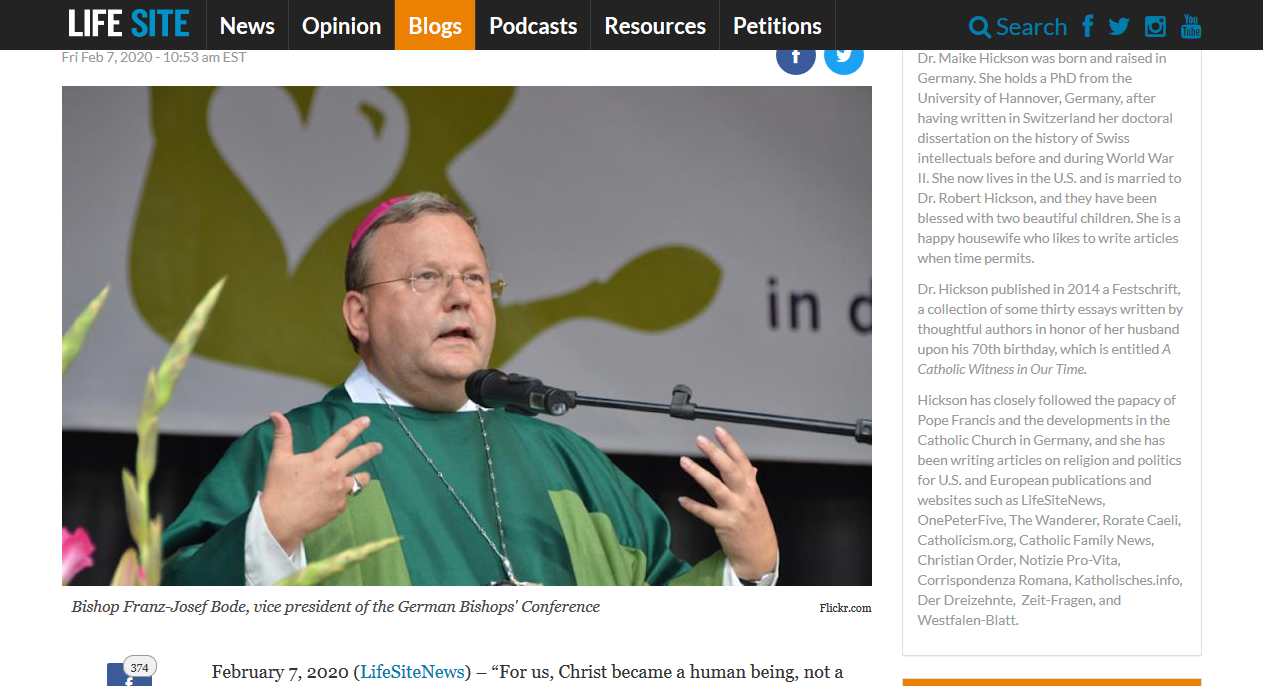 It was reported in English, today, by LifeSite News, that the Vice-President of the German Bishop’s Conference said:  “For us, Christ became a human being, not a man”. — The context seems to imply that the word man is being used in the sense of a human who is not female.

To say that the Son of God became a human being, not a man — here man is used in the sense of an individual substance of human nature, that is, a created person, who is human and male — is heresy.

It is heresy, because it says that the Son of God became another individual other than Who He is. That would imply that He was no longer the Son of God.

Perhaps it can be interpreted to say that the Son of God became also another individual other than who He is, but that would be the Heresy of Nestorianism, which Held that Christ was two individuals fused by a moral union or harmonious activity.

But the Bishop shows that he knows even less theology, because he says, “Christ became a human being, not a man”, but the Name of Christ refers to the Son of God Incarnate, or at least, if you are an adoptionist heretic, to the Man who is conceived in the womb of the Virgin.

The Catholic Faith is this: The Eternal Son of God, Who is a Divine Person possessing fully the Divinity of the Father, but being distinct as person from the Father, became Man, that is was incarnate in the womb of the Virgin. In that incarnation He assumed or took to himself a Human Nature of an real supposit, but united it to His Divine Person by an eternal bond, never to be broken again. That is why that Man is not a man, but the Human Nature of the Eternal Son.  For this reason that Man is not a human being, because that Man does not subsist by a human nature or by a created act of being, but subsists by the same act of Being of the Eternal Son, in virtue of the Hypostatic Union, or inseparable personal possession of that Man by the Son. Thus to touch Jesus, the Man, is to touch the Son of God, and hence to touch the Divine Nature. That is what makes the worship of Jesus an act of worship of God. And that is what makes the Christian Religion the only true Faith.

A lot of Catholics do not understand these distinctions, because they have never studied Catholic Theology. That this Bishop gets it so wrong is a clear sign that he is incompetent to be a Bishop and that the Synod he is a part of is probably also such.

Br. Bugnolo is the English translator of Saint Bonaventure of Bagnoregio’s Opera Omnia, Tome I: On the One and Triune God, in which these distinctions are talked about at greast length. You can get a copy through The Franciscan Archive.

CREDITS: The Featured Image is a screen shot of the LifeSite News page cited in the article, used here according to fair use standards for editorial commentary. LifeSite News is one of the leading Catholic news Agencies in the United States.