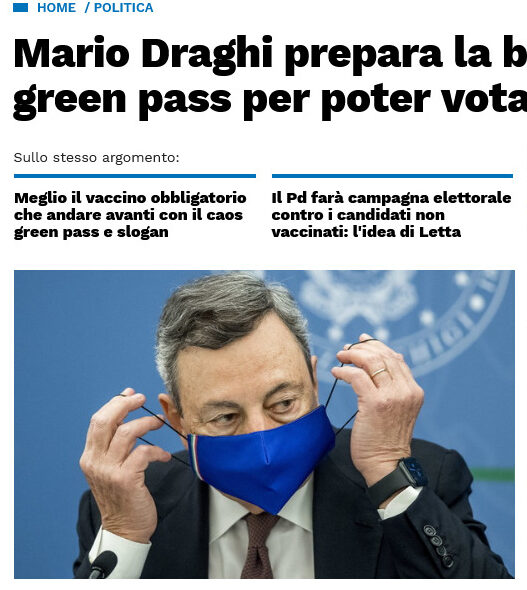 The ultimate goal of Globalists: to strip every human citizen who opposes them of every human and civil liberty, is in the works in the Italian Parliament: Mario Draghi, former Goldan Sachs VP and former Bank of Italy President, has declared his intention to extend the “Green Passport” or Death Vaxx Passport to include voting and running for office.

This will guarantee that no one who refuses the Vaxx or submission to the New World Order Death Cult will be able to participate in public life or chose the leaders of Italy’s future.

The move, already seen with shocked-yes, inside the Prime Minister’s own office — who leaked it to the press — is being called the Atomic Bomb of Italian Politics.

This move will make necessary armed civil rebellion, because if passed into law, there will no longer be an Italian Republic which embraces every citizen: there will be only a Nazi Sanitary State with Party Members’ privileges and a subclass of slaves with no rights.

Click the image above to read the original article in Italian, at il Tempo.

Critics of FromRome.Info ridiculed this journal in May when we warned that Draghi was making the Vaxx obligatory for all Italian residents.  Our interpretation of his actions and intentions then, has proven 100% correct.