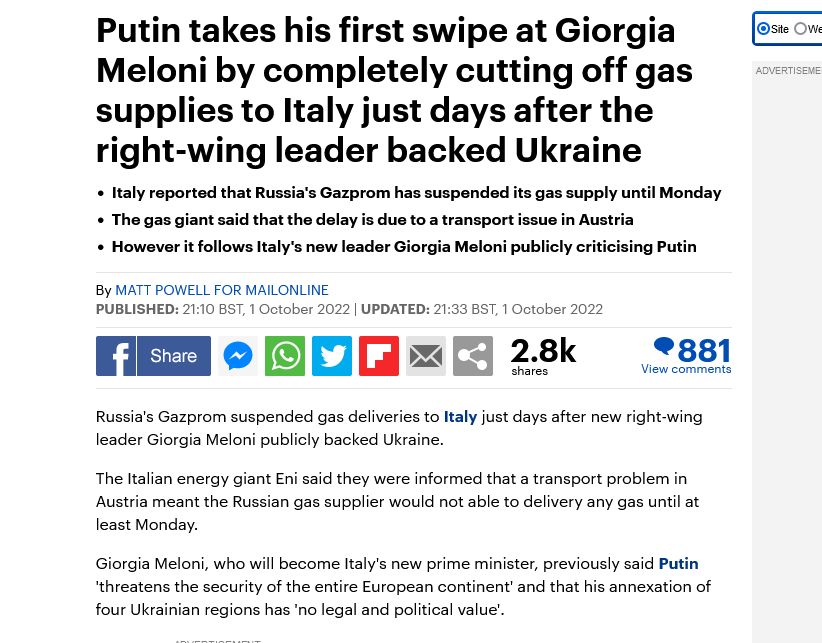 Editor’s Note: Click the above image for the full story. — This seemingly small story will cause further havoc in the Italian economy. I was just talking to an Italian who lives at Rome. His gas bill went from 50 euro to 250 euro per month, in one month! And that was at the start of September. He uses gas only to cook his families meals. Not for heat. So now he has turned off the gas, and is cooking on a camping stove and making his morning coffee over a candle! — I do not see how Italians are going to survive the winter, as morning temperatures even in sunny Rome, range at about 32 degrees from December to March. — Add to that, this fact, that about 60% of Italians have taken the DeathVaxx, and many of them have failing immune systems, and there will be a wave of deaths this winter from poverty, freezing to death and the cold.

And yes, this is caused by Putin. There is no other cause.

I am hoping the politicians of Europe remove the taxes on electricity, gas, gasoline and diesel, so that the poor might survive this crisis. I have been advocating that for 2 years, as president of L’Italia per gli Italiani. Alas, like in the USA, no politician is talking about removing taxes on fuels and electricity, because they are milking this crisis for their friends in the fuels industry, and because it achieves that which they are working for Agenda 2030, when “you will own nothing, and be happy” (WEF Founder, Schwab).  Happy, in that sentence, means I think, “dead”.

2 thoughts on “ITALY: Gas deliveries from Russia suspended by Putin”