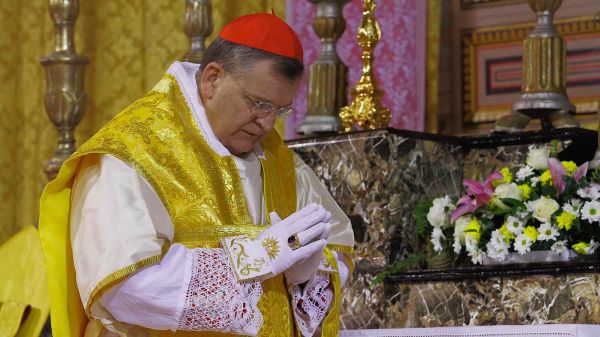 Tuesday in the Novena of Pentecost, 2021 A. D. —  As the readers of FromRome.Info know, Cardinal Burke has expressed his doubts about the validity of the renunciation of Pope Benedict XVI during a visit to the Diocese of Phoenix, Arizona, USA, in 2016, according to the personal testimony of a monsignor of that Diocese, who heretofore has not wanted to come forward about the matter, but who spoke with a reader of FromRome.Info.

But now, I can confirm from my sources here at Rome, that Cardinal Burke does indeed doubt the validity of the renunciation and has done so from February, 2013!

In a matter so grave as the incomplete or dubious resignation of a Roman Pontiff, our duty as Catholics, who have received the gift of the Holy Ghost in the Sacrament of Confirmation, is that we do not conceal such doubts but speak openly of them. Indeed, it is a grave violation of the duty of a man of God, that in a matter which touches upon the salvation of billions of souls, that he be reticent or silent or conceive of a discretion that it be virtuous to do so.

This is particularly true because the very principles of right (ius) teach that one must not presume that the right of another has ceased: de iuris cessione non presumat! This principle is affirmed in Canon 21, which says, “In doubt the revocation of a preexisting law is not presumed” (In dubio revocatio legis praeexistentis non presumat). It is reinforced by Canon 124 §2, which says that juridical acts which are posited in a due manner according to the norms of law are to be presumed valid: wherefore, if there is a prima facie  discrepancy in the text of the act from the norm of the law, it is licit to presume that it is invalid.  This is confirmed again by the Code of 1983, in canons 40 and 41, which concede the right of a subject to doubt the validity of an administrative act which is, respectively, either nullus (which is not an administrative act), or contains some undue circumstance or detail. —  And this is a noteworthy and wide space for discretion. — Thus in the case of the man who is the Pope, in renouncing, if he objectively does not fulfill the terms of Canon 332 § 2, it can licitly and legitimately be doubted that he has renounced. — And this I speculate is the rationale in Burke’s position.

In fact, I can affirm that according to my sources, Cardinal Burke’s doubt is founded upon the fact that Joseph Ratzinger renounced the ministerium and not the munus of the Papal Office. — This makes him among the very first to do so, according to the historical record.

I can further affirm, that according to my sources, Cardinal Burke has spoke to many about his doubt no only in February 2013, but before and after the Conclave of 2013.

For this reason, I can with great probability surmise, now, that the reason the Vatican will not tolerate or enter into any discussion of the invalidity of the Renunciation is precisely because the Mafia of St. Gallen fears that such a discussion or investigation will find that Benedict XVI is the true pope and that the Conclave of 2013 is uncanonical by reason of the incomplete renunciation.

Therefore, out of my love for Christ and His Church, I now call upon all the members of the Sacred Hierarchy, upon all canonists and theologians, and upon all clergy, religious or laity, who know more of these matters to speak openly of what they know and stop with this vain and destructive pretension to discretion.

All the faithful have the grave solemn duty to remain in communion with the true pope, and submit to him, according to the magisterial teaching of Pope Boniface VIII in Unam Sanctam. Accordingly, each and every member of the Catholic Church HAS THE DIVINE RIGHT to know who the true pope is.  Silence or discretion which obstructs that right IS A HIGH CRIME AGAINST THE COMMUNION OF THE SAINTS!

Finally, I wish to publicly apologize to His Eminence, Cardinal Burke, for having publicly and privately spoken in criticism of him for his silence or unwillingness to recognize the invalidity of the renunciation. I was wrong to construe my lack of information about his position, as anything more than that.

For more about the precise canonical argument for the invalidity of the renunciation, see here.

Here is the official French Translation of the above. Click to read. 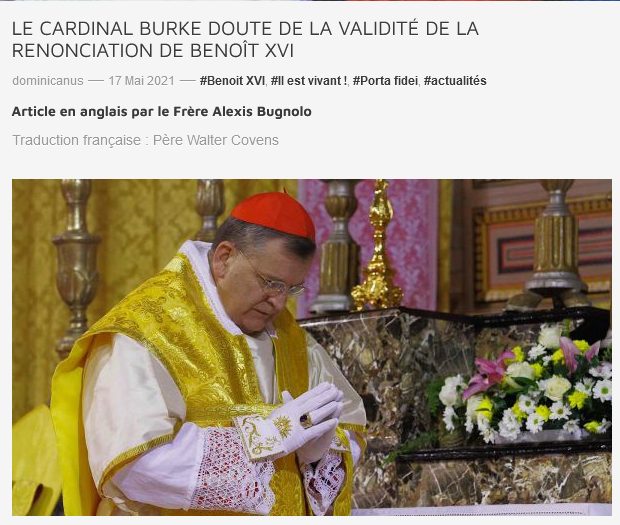