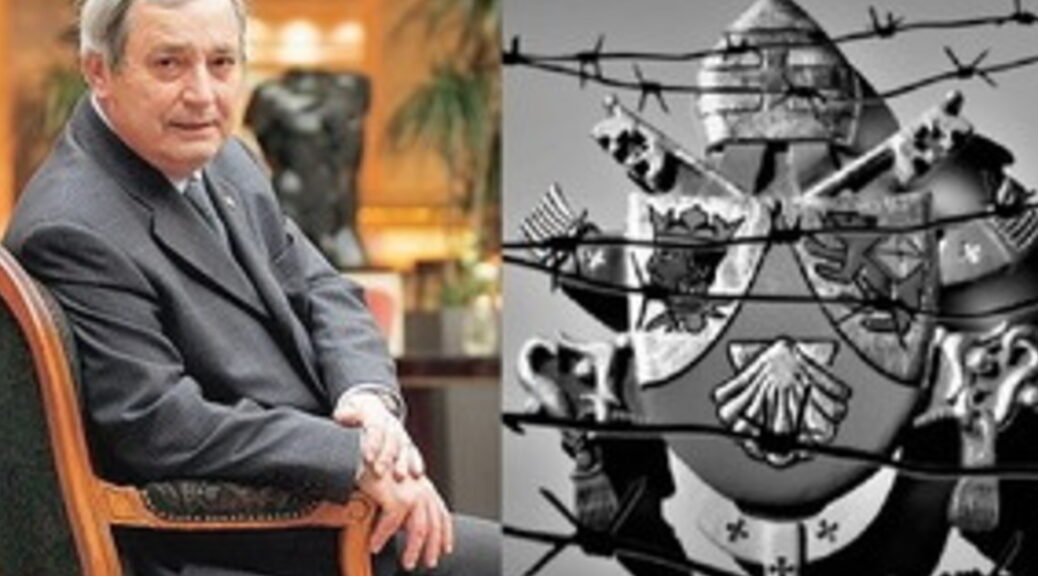 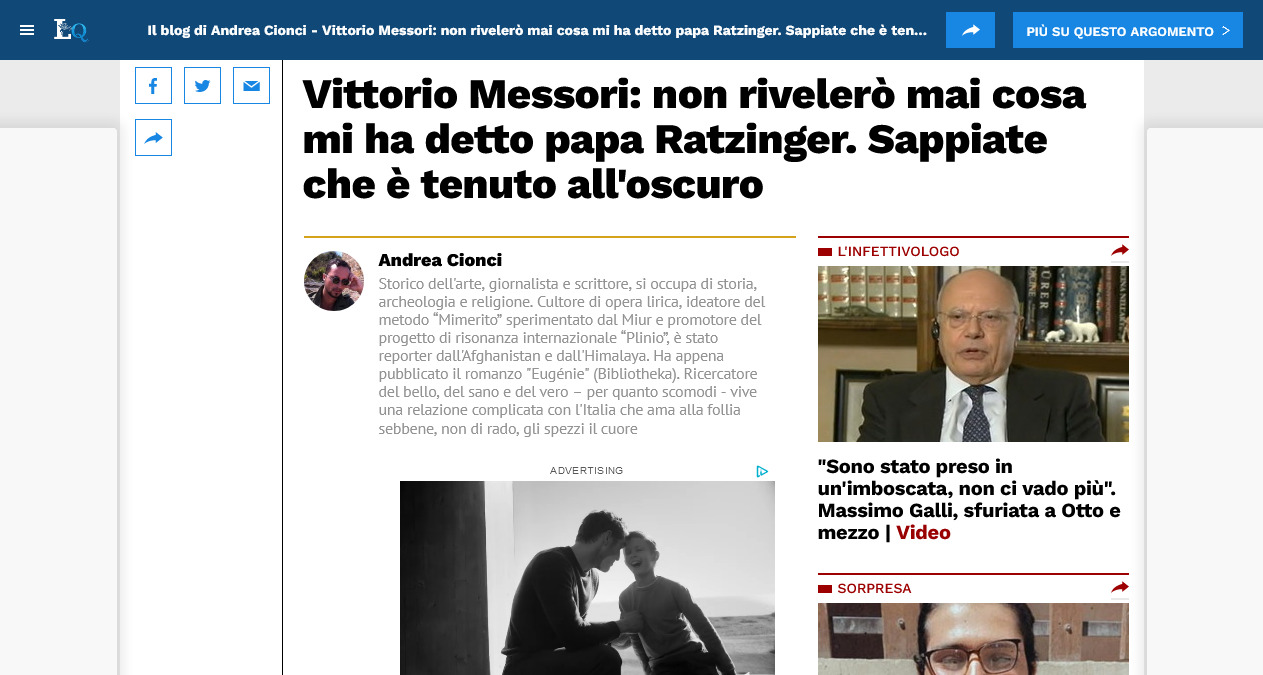 As we have already said, on the anti-papal coup suffered by Benedict XVI, this is the first, extraordinary “participatory investigation” in the history of journalism . There are so many inputs, reports, information, documents that have come from simple readers, good Catholics who do not accept to see their Faith and their Church destroyed under the globalist agenda, without doing anything. In this regard, anyone with suggestions or information can write to codiceratzinger@libero.it : we will carefully examine all the material received, checking it carefully.

The Testimony of Vittorio Messori

A reader sent us yesterday the complete recording, made by a spectator, of a public meeting that took place in June 2016 at the Franciscan Rosetum Center in Milan . The protagonist, the most authoritative and famous of Catholic journalists, Vittorio Messori, who presented his latest book “Hypothesis on Mary”. HERE you will find the official recording of the event from which, however , the final part was cut out, with questions from the public, during which the Turinese journalist made shocking statements which are only now finding a very precise location. We make the material available to interested colleagues and in the meantime we report the exact words of Vittorio Messori:

“In September I had a private meeting with the ‘pope emeritus’, as he wanted to be called. A really strong friendship was born with Ratzinger with that book “The Ratzinger Report” (1984) that we did together. He, with his typical generosity, wanted to repay me with his friendship, so much so that, at times, we would go for dinner together in a trattoria in Trastevere. This personal relationship has continued, but since February 11, 2013  I have not come back because I wanted to respect his retirement. It was his secretary (Mons. Gaenswein ed) who phoned me saying: “His Holiness would be happy to see you again in the name of the old past, come and visit him in his retreat, howeverit is understood that His Holiness awaits you as a friend and not as a journalist. Yours will be a private meeting and therefore there will be no public things to offer ”.

“I strictly adhered to this even if, of course, as an old journalist, if I had told Corriere some of the things Ratzinger told me, well… I would have filled the news for a long time. But I did violence to myself, and no one, not even with pincers, will ever get me out of what Ratzinger really told me. The only thing I could say – which however is significant – is that when Ratzinger asked me for my opinion on the current situation of the Church, I sincerely expressed this climate of perplexity (to put it mildly), of restlessness. curiosity about how it will end, in the face of certain experiments. Anyway, I told him how I thought and it is quite significant how, after listening to me,he opened his hands, raised his eyes to heaven and said: “I can only pray.” But know that only the news that others decide reaches him. I discovered, for example, that he only receives two newspapers: the Corriere della Sera and the Frankfurter Allgemeine Zeitung. That is, when they come to say: “… but there is Ratzinger who is enthusiastic about his successor!”, I do not see what he could be enthusiastic about, or indignant, since the news does not reach him. He does not see the TV, he does not listen to the radio, he only gets the Corriere who is pro-pope (Bergoglio ed). POPE RATZINGER IS COMPLETELY UNINFORMED . Anyway, whoever lives will see”.

Even if we are immersed in a dystopian reality, can you for a moment realize what this means? A pope, albeit an “emeritus”, who only receives two newspapers and is completely uninformed. Normal, isn’t it? Above all, the journalist friends who come to visit it must not publish anything, while the journalists for “Pope Francis” such as Massimo Franco, of the very Bergoglian Corriere della Sera, can do so! The greatest Catholic journalist who says: “You won’t even take away what Ratzinger told me with pliers, otherwise I would have filled the news for weeks”.

Now, let’s be honest: do we want to say that Vittorio Messori is also a conspiracy theorist?

Did you understand why we have  been telling the pure truth by writing every day that the real pope is only Benedict XVI, and he is in a situation of IMPEDED SEE?

As we repeat for the umpteenth time, he, on February 11, 2013, pronounced a Declaratio that only to those who were in bad faith and wanted to get rid of him could seem a renunciation. In fact, despite the manipulations carried out on the translations, the Declaratio as renunciation is canonically invalid and implosive, while it is completely consistent as a declaration – non-juridical – of self-exile in an impeded See (canon 412). For this reason “the pope is only one” , as Benedict XVI has repeated for eight years, without ever specifying which one, and for this reason he sends us all the messages in the now well-known “Ratzinger Code” (HERE) which shape exactly, constantly this canonical situation thanks to which Bishop Bergoglio self-schismed and became a usurper antipope. You will find the whole investigation rearranged from the beginning, by chapters, at the bottom of this article HERE .

Now, we say it with affectionate concern to the other colleagues and to the members of the clergy who continue to carefully avoid these macroscopic, previously unknown canonical, circumstantial, theological, historical, documentary, testimonial evidences, refusing even to discuss them: how much do you think we can still keep in mind, alive the tale of the abdication, “of the old retrograde pope who, too old and with one foot in the grave (for eight years), agrees to step aside to make room for the good Pope Francis, merciful and revolutionary “? History teaches that, Darwinian impostures do not stand the test of time , and it is in the logic of Plan B HERE that we certainly arrive at a revealing moment. Then, many careers will go up in smoke in a flash.

Moreover, in an age like this where everything is controlled, filmed, recorded, transcribed and just a click away, it is completely crazy and anachronistic to believe that we can keep any secret, even more so one of the kind, moreover with a ‘ investigation in progress, well known, carried out on Libero and ByoBlu, in which thousands of readers from all over the world can potentially participate.

Let us remember what Someone once said long ago: “If they keep silent, the stones will cry out.”