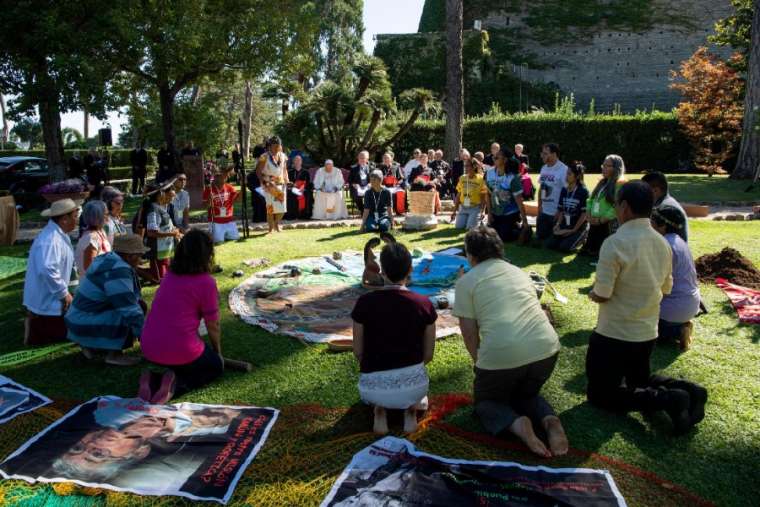 Canon 359 expressly withdraws authority from the College of Cardinals to elect a Pope, when the Papal Office is still retained by another: there being no sede vacante. To call a conclave when there is still a true Pope, thus, is illicit. To elect another is to participate actively and immediately in the crime of the usurpation of the Papal Office.

Usurpation is the crime whereby someone without a legitimate claim, lays hold upon or claims an office which is not his.  In the 1983 Code of Canon Law, Usurpation is discussed under several canons, usurpation of office in canon 1381.

Though the crime of usurping the papacy is not named in the code expressly — since it has not occurred for centuries, those participating in such a crime can still be excommunicated latae sententiae out of the consequences of such an act, and this in two ways: 1) by the Anti-Pope ordaining bishops and collaborating with him in that, 2) by the crime of schism.

The first regards the crime of usurpation itself in the act of ordaining Bishops.

The worse crime of usurpation mentioned explicitly in the code is in canon 1382:

Can. 1382 — A bishop who consecrates some one a bishop without a pontifical mandate and the person who receives the consecration from him incur a latae sententiae excommunication reserved to the Apostolic See.

Pope John Paul II cited this canon to declare that Archbishop Marcel Lefebvre, the founder of the Society of Saint Pius X, was excommunicate on account of his ordination of their 4 Bishops. Bergoglio cited this same canon to “excommunicate” Bishop Williamson, after he was reconciled by Pope Benedict XVI, who undid John Paul II’s excommunication.

Accomplices of both are also punished by the same punishment, as is clear from canon 1329.

Can. 1329 — §1. If ferendae sententiae penalties are established for the principal perpetrator, those who conspire together to commit a delict and are not expressly named in a law or precept are subject to the same penalties or to others of the same or lesser gravity.

§2. Accomplices who are not named in a law or precept incur a latae sententiae penalty attached to a delict if without their assistance the delict would not have been committed, and the penalty is of such a nature that it can affect them; otherwise, they can be punished by ferendae sententiae penalties.

Since the excommunication leveled in canon 1382 takes place immediately without the necessity of any public declaration by any authority, in accord with Canon 1329 §2 all the Cardinals involved in the uncanonical election of an Anti-Pope are also ipso facto excommunicated, since they participate intimately and immediately in his claim to exercise the pontifical mandate.

While it can be argued that those in substantial error as to the invalidity of Benedict’s resignation ought not be excommunicated, because they had good will, they must confront canon 15, which says in § 2: Ignorance or error about a law, a penalty, a fact concerning oneself, or a notorious fact concerning another is not presumed.  Thus, as soon as any Cardinal Elector sees that Benedict resigned the ministerium, not the munus, and that Canon 322 §2 requires the resignation munus — all the while refusing to repudiate the validity of that resignation — he becomes indisputably culpable of the usurpation of the Papal office by way of consent to uphold Bergoglio’s claim to exercise the pontifical mandate, and as such, merits punishment under canons 1382 and 1329 §2.

The second way to excommunication latae sententiae, is through the crime of schism.

Cardinals and Bishops participating in supporting an Anti-Pope are also involved in the crime of schism, since they formally separate themselves from communion to the true Pope. Thus they are also subject to excommunication from canon

Thus, the controversy over the invalidity of Pope Benedict’s resignation becomes one of the greatest import for Catholics, to know who is truly their pastors and who are truly schismatics and excommunicates.  This is not a joking matter, and any Cardinal or Bishop who treats it as such, should be sternly reminded of such.

Finally, it needs to be pointed out, that whereas there is a presumption of validity of every Conclave, in the event of the death of the Roman Pontiff, however, in the case of a papal resignation, there is no such presumption, and since it is the grave duty of the Cardinals to act in accord with Canon Law in the election of the Roman Pontiff, they had the grave and solemn duty to verify that the resignation of Pope Benedict was in conformity with Canon 332 §2.  If they did verify that, why have they never admitted to having verified it? And if they did not, they ostensibly become culpable of usurpation out of negligence in so grave a duty.

Indeed, the Vatican is full of Doctors of Canon Law, but to my knowledge neither in February of 2013 nor in the following six years, as any Canon Lawyer from the Vatican published any study showing that Non solum propter effects a valid resignation in conformity to canon 322 §2. Nor does it seem that anyone in the Diplomatic Corps asked the Vatican for such a verification.* Nor does it seem that the Italian Government, bound by the Lateran Treaty to uphold only constitutional governments in the Vatican, ever asked for such a verification or explanation. — If this be true, its of the gravest indications that the resignation was never put to any kind of rational scrutiny, but was presumed to be valid by a bunch of giddy men who wanted Benedict out of the way.

* For example, Eduard Hapsburg, the Ambassador of Hungary to the Vatican, recently insulted Catholics who question the validity of the resignation. But when asked for a verification of the resignation, remained utterly silent.