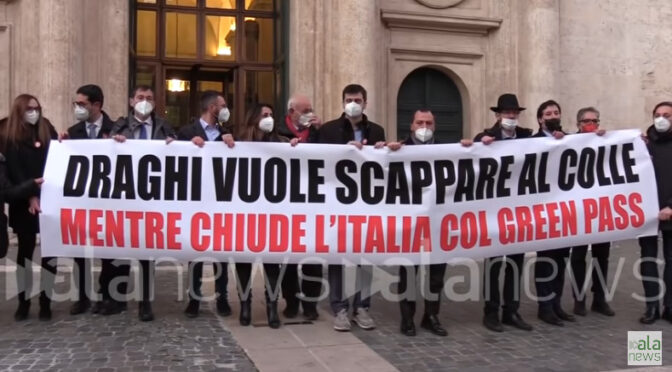 The Day before yesterday, the Italian Parliament began its balloting to elect the new President of the Republic.

In Italy, the President is not elected by the people, but is chosen every 7 years by an electoral college comprises of both Senators and MPs plus 58 special electors chosen by the governments of the 23 Italian Regions and Autonomous zones. For more about the office of President of the Italian republic, see here.

The flash mob of MPs and Senators protested the gravely unconstitutional and unethical  manner in which Mario Draghi is trying to extort the votes of parliamentarians for his candidacy. Worse still, Draghi is trying to purchase votes by promises to individuals to be members of a future government, which is forbidden by the Constitution.

Their banner reads in English: “Draghi wants to escape to Capitol Hill, While he shuts Italian down with the Green Pass”.

The Flash Mob members ask that their colleagues in Parliament join with the MPs of the non-affiliated MPs to oppose this criminal behavior, and call for Draghi to be prosecuted for crimes at international tribunals. They also ask that they chose, instead of Draghi, Paolo Maddalena, former Vice-President of the Constitutional Court.

Throughout his government, Draghi has run Parliament like a mob boss, passing one decree after another on a majority call vote, which if it failed, would cause the government to collapse.  He did this knowing that the parliamentarians fear most of all new elections, where they would be wiped out of Italian politics forever and lose legal immunity where they could be prosecuted for the conspiracy to genocide of more than 50 million Italian residents.

The current out-going president is Sergio Mattarella, former Justice of the Constitutional Court which was involved in the extra-legal unconstitutional sanation of the unconstitutional methods of election in recent decades. See my legal analysis of that judgement here. — (N. B. I am not an attorney of law, and so approach the problem from the principles of the philosophy of law). — Mattarella is also the son of a powerful Mafia mob boss.

How could he ever have been elected to be President? — Only in Italy or a banana republic.  Except here, instead of a US banana company calling the shots, it’s the investment house (now bank) Goldman Sachs handlers in New York City, the Skull and Bones Banks:  Brown Brothers Harriman, City Corp, , and JP Morgan/Chase.

The protesters call upon the members of the government, which Draghi fashioned out of a compromise with all major parties, to break with Draghi and join them in not voting for his nomination.

On the first vote, Draghi only garnered 4% of the electors votes. Most are holding out to see what they can get for themselves in turn for giving Draghi 7 years in the ex Papal palace of the Quirinale and life immunity from prosecution, not to mention a salary and pension fit for royalty.

In Italy, it is a crime to insult the President. This may be another reason why Draghi wants the office so badly.  They globalists want him also, as they see him as necessary to break down Italy and merge it into the New Nazi Union of Europe (EU).

Senator Sgarbi forsees that Draghi will be elected President with a 66%+ majority on the 3rd or 4th vote: