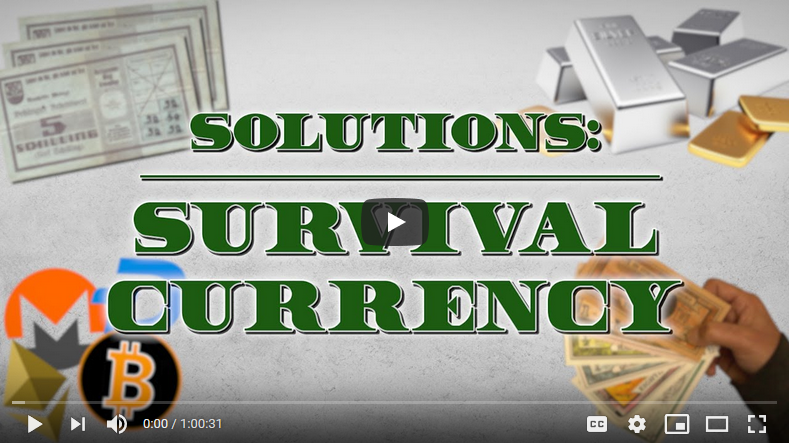 By way of understanding my comments there, please watch this program by James Corbett on Survival Currency which poses the problem and reviews the issue.

He discusses among other things, hard currencies and bartering, which being an anthropologist, I advise are the best options to the problem which is heading toward us all like a speeding, out of control train: the complete financial isolation of political dissidents.

The weakness of his counsel is that he suggests forms of exchange and currency which require that the exchange be supported by things which the State can or will control, such as the power grid, corporations, legal structures etc..

But in all cases, the key to making any survival currency work is the need that someone take the risk to be the intermediary, someone take the initiative to be the promoter, and that groups begin not only to use the alternative methods but have community understanding of its advantages. Or in other words, building a trust system.

For example, as regard hard currencies, such as precious metals, there are already businesses licensed to buy and sell the metals. But there are no intermediaries between them and retailers to exchange the metals as currency. If individuals can work out how to facilitate that while managing the risk, such intermediaries will enable local businesses and residents readily begin to use precious metals in financial exchanges.

For the barter system, likewise, there is needed individuals to start barter warehouses, where items can be stored in quantity as a way to facilitate the rapid exchange of things for things through local businesses and individuals.

For labor credit systems, similarly, there is a need for someone to regulate and systematize the change of the credits.

All such middlemen will eventually become the promoters and protectors of the liberty of humanity.

From my limited knowledge of finance and financial laws, it appears to me that only the barter system could not be outlawed by the State, since it is based on the physical exchange of things, all of which exchanges the State could never control without destroying or denying private property itself — a thing which however is conceivable and has been done in Marxist dictatorships.

For this and for the facilitation of the exchange of precious metals, one can create such an intermediary authority simply by issuing a standardized parallel non-governmental paper certificate of acquisition at the time of purchase of the item by which the price of the item was established in the local currency.

Such certificates authenticate the authenticity and value of the item exchanged or bartered and the date upon which such valuation was made and provide a handy way for others to exchange the item according to a standardized valuation in the local currency, or in the case of precious metals, to certify they have been acquired or sold locally at authorized vendors. All one needs to do is to print up such serialized non sequentially numbered certificates and make agreements with merchants to issue and accept them with their own proper marks as countersigns — assigning for example the right to issue such certificates only to them — at the time of sale or exchange of an item which is not yet so certified. Since every certificate accompanies a real thing, item, or merchandise, counterfeiting is neigh impossible or useful, for since the value is in the item, not in the certificate, the potential receiver of the item can immediately verify its value and know from the local merchants, who to contact to so verify it if it be in doubt. Obviously, here, I am speaking of non consumable items of exchange, whose value does not decrease with time. And if one had a barter warehouse in the local area, the deposit of certain items could take place to facilitate the exchange of cumbersome items.

Such a certificate with wide social acceptance will itself in time  become the private guarantor of all new forms of currency. The standardization of such certificates by local private investors will be the way forward and out of the control of globalists. And since neither paper nor the receipt can be outlawed, without the NWO itself losing control of the populace, such a method of intermediary authentication appears to be invincible.

Here is a case example to illustrate how such a system could work:

Mr. Johnson has a blue ware tea cup, but needs to buy food. He takes the cup to an antiquarian shop, which acquires it from him in exchange for an autograph by Winston Churchill. The antiquarian issues 2 certificates, each of equal value, say 200 pounds sterling, certifying the acquisition or sale of each item. Each certificate bears the mark of the Antiquarian shop and date.  Mr. Johnson then takes the autograph of Winston Churchill with the accompanying certificate valuing it at 200 pounds sterling, to his local supermarket, where he buys groceries by exchanging the autograph and certificate. The manager of the supermarket takes the certificate and autograph to the locale barter warehouse  and exchanges it for currency or goods to be sold in his supermarket. Mr. Thompson has his groceries, and both the tea cup and the autograph are now mediums of exchange in the local economy. The certificate remains with the thing, while the receipts which are issued in accord with civil law, at time of sale, remain in the hands of the ones originally acquiring the item.

The barter warehouse can shield itself from risk by selling items, which it has already acquired, in cash for higher values than the certificates indicated, at which time the certificate is destroyed, and or reissued at a higher valuation.

This concept of barter certificates can be rapidly expanded to large portions of the economy because of its simplicity of removing all evaluation and state control from the State and moving back to the private sector.

The Association of Registry Agents authorizes an individual in each town to establish a registry of Businessmen authorized to issue certificates, and prints standardized serialized certificates and sells them to the businessmen, and surveils their usage in the town. Businessmen register with the agent, who then maintains an official registry of their marks and items which they are authorized to so authenticate the value.

The Association of Barter warehouses lists and certifies those individuals running such operations in each locale and sector of the economy and coordinates the relations of the wider business community in their dealings with the entire system, by promoting knowledge of this method of exchange and overseeing the quality and regulation of the warehouses and consumer complaints, so that local registry agents know who to entrust with the redemption of the items so authenticated.

The Brokerage for Bartered Exchanges would facilitate the geolocation of items in Barter warehouses and Businessmen interested in acquiring items by certain categories. It would act as an intermediary in the purchase and sale of such items from warehouses and thus facilitate the mutual exchange over the entire nation of the items so acquired by the warehouses, reducing their risk, while adding value to items which are of an interest to prospective acquisitioners, not locally, but nationwide. The Bartered Exchanges would give guidance to the evaluation of items to both Businessmen issuing the certificates and warehouses redeeming them.

The system could be expanded to include services by issuing certificates for the exchange of work, which would be redeemable only by the worker receiving them at a business participating in the above described system. These work certificates would be sold to employers, for cash or other bartered items (e.g. products made by employer) and be pre-denominated receipts, by one or more of the national agencies,

In this way one creates a trust system to promote barter for all items physical or intangible, and replace State backed currency completely.

Finally, the barter system so envisioned can be proposed to the national association of pawn brokers and licensed precious metal retailers as a way of creating quickly a nationwide system which would be most apt to grow the businesses of their members.