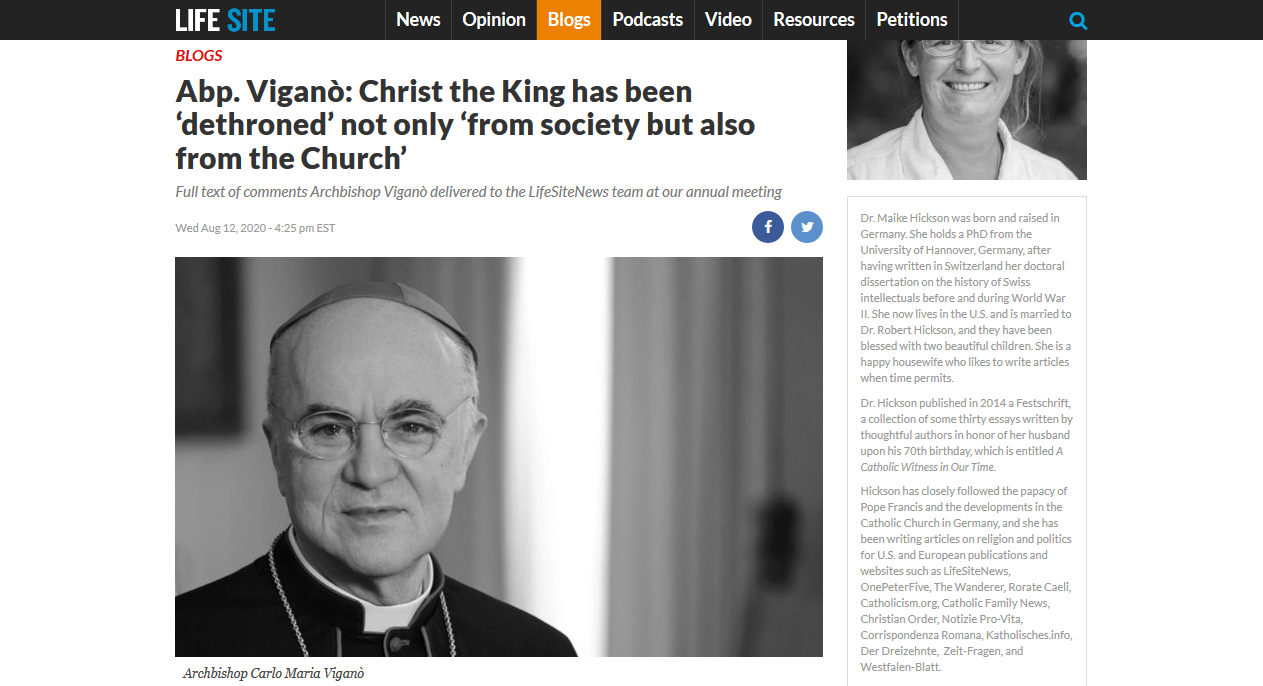 There is nothing worse that mixing politics in with our Holy Catholic Faith. Nothing worse, in the sense of no more deceitful way of spreading heresy and committing sacrilege under the guise of righteousness.

And so, I cannot  be silent when I see it.

And I cannot tolerate it, when such filthy hands are laid upon Holy Mother Church.

I must speak out.

And thus, I now speak.

Archbishop Viganò, you have betrayed the Church!

You have betrayed Christ!

You have joined the Masonic sect in sharing their most vile thoughts and attacks upon our Sacred Religion!

How dare you, in your recent address to the “TEAM” at LifeSite News DARE say that Holy Mother Church is guilty of dethroning Christ Jesus!*

Who do you think you are?

What kind of a heretic are you vying to be?

You know well that Holy Mother Church is immaculate! Sinless! Willed and sustained by Christ!

Why do you pretend otherwise?

HOW DARE YOU PRETEND OTHERWISE!

You know well that by spreading such lies and falsehoods you damage the reputation of Holy Mother Church, sow doubt in souls and open the gates of Hell to many of the week sheep of Christ?

WHAT GAME ARE YOU PLAYING AT!

You dare to say that the Church can be “reconstructed”? Have you any idea of what the Church is, and Who it is who built and sustains Her? Do you really think any human power can rebuild her? Or that the gates of Hell have destroyed or damaged Her?

I for one will not be silent!

I call you out for what you are!

An enemy of the Holy Catholic Faith!

And a clericalist of the worst kind, who has NOT the courage to fault errant popes and bishops, but has the BLASPHEMOUS DARING to assault Holy Mother Church and let the impure spit of you vile thoughts fall upon Her Immaculate Face!

The problem in the Church is men like you, who blame the Church or others for your own omissions and sins. You know well that Benedict never resigned the papacy according to the norm of Canon 332.2, but you continue the pretense of recognizing Bergoglio as pope, so as to score points with the Conservative FreeMasonic World Order.

Away with you! And all your kind!

That is the real way to repair Holy Mother Church and restore the Social Reign of Jesus Christ! For without real repentance, there is no real submission to Christ.

* Direct Quote of Vigano’s words: We therefore find ourselves not only besieged in the civil sphere, in which for centuries dark forces have refused the gentle yoke of Christ and imposed the hateful tyranny of apostasy and sin on the nations; but also in the religious sphere, in which the Authority demolishes itself and denies that the Divine King should also reign over the Church, her Pastors and her faithful. Also in this case, the sweet yoke of Christ is replaced by the hateful tyranny of the Innovators, who with an authoritarianism not dissimilar to that of their secular counterparts impose a new doctrine, a new morality, and a new liturgy in which the only mention of the Kingship of Our Lord is considered as an awkward legacy from another religion, another Church.

COMMENT: Everyone in the Church knows that the infallible Magisterium, which alone represents the Church has never approved any of these innovations. It defies logic to ascribe to that authority, that which those who did not exercise that authority FAILED to do when the failed to exercise it. To make such a charge is to transfer, from failing men, the failures of men to the authority which cannot fail and has never failed, when exercised aright.

17 thoughts on “No, Archbishop Viganò, it is you who have betrayed the Church!”