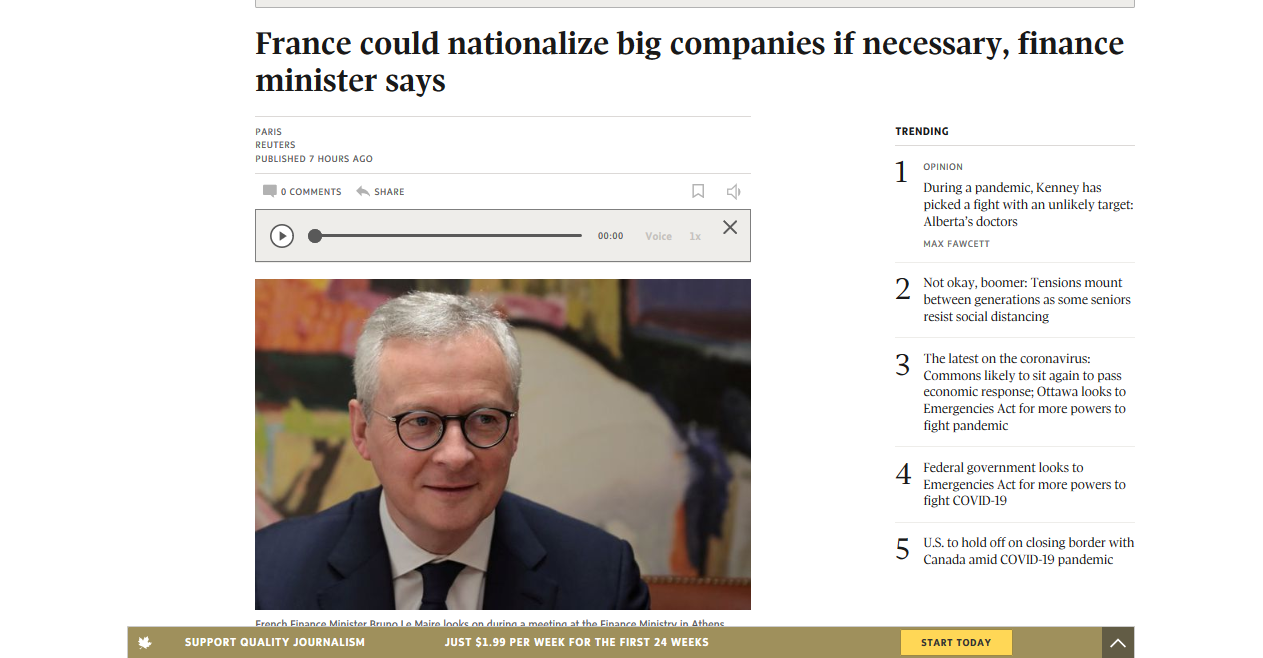 The Globe & Mail and Russia Today are both reporting that the French Minister of Finance, Bruno Le Maire, thinks that the crisis causes by the panic induced by the Main Stream Media and Leftist politicians in response to the Corona Virus — better known as the Wuhan virus — is sufficient justification to the French government to take control of major corporations.

According to the Globe & Mail:

Bruno Le Maire’s remarks are the strongest indication yet that Paris is ready to pull out all the stops to steady the country’s biggest companies amid the turbulence unleashed by the coronavirus pandemic.

“I won’t hesitate to use all means available to protect big French companies,” he said on a conference call with journalists.

This is truly a disturbing statement.

But it appears to signal that the globalist elite are confident enough in their control of the psychology of the masses as to begin to implement the form of communism of China, which is the real goal of all this panic mongering, in the opinion of many experts and commentators on media manipulation.

Because, obviously, a few weeks of influenza is no reason to seize the property of major parts of the national economy, unless of course that was the objective in the first place.

This tactic of using panic to seize private property was used by Barrack Obama during the 2008-2012 financial crisis to justify the seizure of General Motors in total violation of every US Law and and constitutional right. In the process, Obama shut down the GM dealers nationwide, since they were one of the biggest funders of political candidates who opposed his party.

CREDITS: The Featured Image is a screen shot of the page at The Globe & Mail cited in the article, and is used here in accord with fair use standards for editorial commentary.